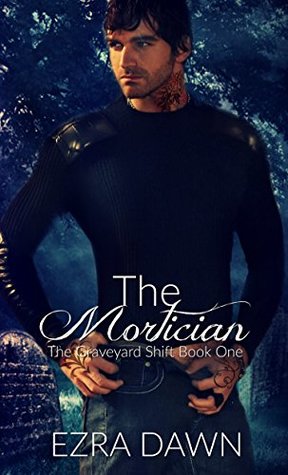 Blurb: Dimitri Sullivan is The Mortician at the Phantom Creek Mortuary. He’s the go to guy when it comes to preparing a body for burial. No one can do the job like he can. Even the worst of injuries don’t faze him. You name it he can fix it. He’s a miracle worker. However, when it comes to romance people tend to run from him screaming. Being a Komodo dragon shifter just doesn’t do it for them.

Mufasa “Miles” Deidrick is your average lion shifter and a closeted gay man. When his sister dies unexpectedly his parents are too distraught to make the funeral arrangements, leaving the job to him. He doesn’t expect to find his mate. Now, he’s faced with a situation he has to come to terms with. One being that his mate is a man and the other? He has to come out to his parents. Procrastination won’t help him this time instead it may only hurt him.

Review: Dimitri is the guy you go to when you need a loved one ready to bury. He is the magic of the place, not really he is just that good. He is a Komodo dragon shifter who keeps picking out the wimps to date. That is until the brother of one of his bodies shows up. Miles is a very sexy lion shifter who just so happens to be in the closet. Now he has been sent with his sister’s body to get her ready for her funeral. Creepy is how it sounds, but hey these two are mates.

Ok for one this story was a blast to read. The parents were a hoot and gave me a good laugh. Now when I came across this author, which was this morning, I read two of her other stories. The words were similar and so were many of the practices in this book as in those other books. Which tells me this author focuses on certain things. Which is neither good nor bad, but makes the books a bit off to me.

The editorial part of the book was off, there were many mistakes that could be found in the book. The idea for the book was exceptional, but this author needs better betas who should have caught the problems. Also there was no conflict in it, it was like being programmed to say yes and cool all the time. Too happy from everyone in the end. No real chemistry, just instamate and instasex from the moment they met.

Now for all those issues, this story does have potential. I actually had a blast reading it, but it really needs to be fixed up to make it better.