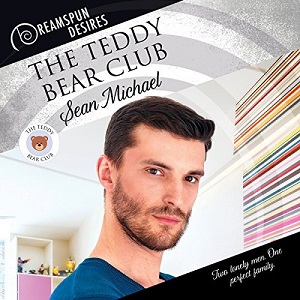 Review: The Teddy Bear Club is a totally cute and sweet romance that was everything I expected after reading the blurb and getting excited. It is narrated by John Solo (I don’t think there’s been a book he’s narrated where I didn’t dislike his narration) and so for me this was a no-brainer – I had no choice, I was going to listen to this book.

The story follows Aiden Lake and Devon Smithson. Aiden has adopted his sister’s two kids after she was institutionalized with a severe mental illness. His nieces/daughters are adorable, and they are a cute little family.

Devon’s sister dropped off her baby son three months and now Devon is making changes in his life to be a father to his nephew – which includes a much-needed name change. However, he is feeling overwhelmed and needs advice and support, which he finds at the Roasty Bean where there are a group of single gay parents who meet up to chat, drink coffee and generally hang about in the company of like minded adults.

The road to romance and HEA is not exactly smooth. Aiden and Devon are willing to take the chance and support each other. There really isn’t much more for me to say than that I loved the loving family’s and the sweet romance. I’m looking forward future books in the Teddy Bear Club series.