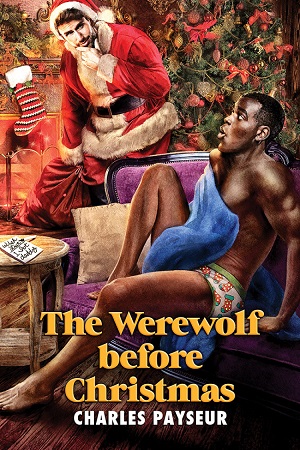 Title: The Werewolf Before Christmas

Blurb: Ray seems like the perfect boyfriend—he’s gorgeous, incredibly romantic, and has a mechanical suit he invented to become the dastardly MantaRay. For Alec, who also spends his nights making life difficult for do-gooders everywhere, it’s a match made in supervillain heaven. Except that Ray is a bit too into the hit soap opera All My Werewolves. When tempers flare during what’s supposed to be a quiet night out, Alec nearly ruins everything over a stupid bet with an alien gorilla.

Desperate to prove his feelings to Ray, and with Christmas fast approaching, Alec decides the fastest way to Ray’s heart is to embrace the thing that threatens to divide them—a certain werewolf show with a certain actor who Ray admires. A simple kidnapping promises to do the trick, only fur (and fandom) fly when Alec’s romantic gesture leads to a very hairy situation. Can Alec prove to Ray how much their relationship means to him, or will his plans be ruined by the werewolf before Christmas?

Review: Alec and Ray are supervillians. Although they really don’t act like it though. Alec wanted to show Ray how he truly felt for Christmas. However his weird side wouldn’t turn down a bet by Ray’s best friend. Now he really had to make plans. Ray loved this soap opera called All My Werewolves. It involved a good twin and an evil twin werewolves, played by the same guy. So Alec made a plan that involved the actor, boy is he in for a major shock and surprise.

While I was wanting a good paranormal story, this was not what I had expected. It had a pretty good twist to it that was pretty cool. I am not much into superhero’s and supervillian’s, but this story kind of made it rock. It was an adventure that is for sure.

I had a kick reading it and I am pretty sure you will also.