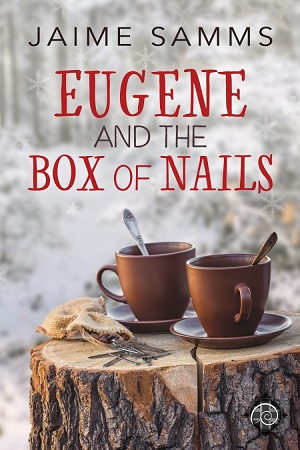 Title: Eugene and the Box of Nails

Blurb: Every time it seems like things are looking up for Eugene Kraft, disaster hits. Bankruptcy, a bigoted sibling, and a back-breaking accident have all left him with little money and less faith in the universe.

His last-ditch effort at peace is the small lakeside property where he is building a tiny house from recycled materials. If he can get it livable before the cold sets in, maybe he’ll be okay. Hopefully Cullen, the foreman on the construction site next door, won’t notice Eugene pilfering discarded materials from his dumpster.

When Cullen stops by to talk to Eugene, he’s sure the gig is up—but all Cullen wants is a date. Can two things go right in Eugene’s life? At first it seems possible. Projects on Eugene’s house are getting completed by what he dubs “construction elves” while he’s off site. But like Eugene predicted, his good fortune can’t last, and soon he has a tough choice to make: give up his home… or the man of his dreams.

Review: Eugene is a sweet young man who has had a hard life. He had not been able to read for many years, went to work with his brother who turned around and stole his money because he was gay, lost his job because of an injury and lost his home. He had to start all over. He bought some cheap land that couldn’t really be used and started building himself a home. Since he was broke you will have to guess where he got his equipment. However it was starting to get real cold. When the foreman from the site he had been grabbing old materials out of shows up, he is real surprised when Cullen tells him why.

This has made my day. Although I understand Eugene’s reason for wanting to do it all on his own, it does show how good some neighbors can be. I absolutely loved this story and would hope that it was going to added onto later on. It was the perfect Christmas story I have came across in a long time.

I really enjoyed it and would definitely recommend it.