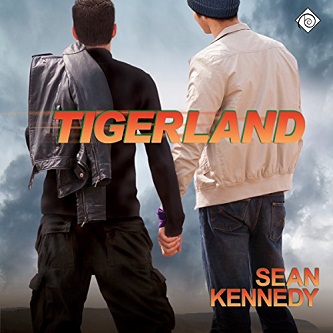 Blurb: After an eventful and sometimes uncomfortably public courtship, Simon Murray and Declan Ty-ler settled into a comfortable life together. Now retired from the AFL, Declan works as a football commentator; Simon develops programs with queer content for a community television station.

Despite their public professional lives, Simon and Declan manage to keep their private life out of the spotlight. Their major concerns revolve around supporting their friends through infertility and relationship problems – until Greg Heyward, Declan’s ex-partner, outs himself in a transpar-ent bid for attention.

Though Simon and Declan are furious with Greg and his media antics, they can’t agree on what to do about it. Declan insists they should maintain a dignified silence, but both he and Simon keep getting drawn into Heyward’s games. Simon and Declan will once again have to ride out the media storm before they can return their attention to what really matters: each other.

Review: Tigerland is the second book in Sean Kennedy’s Tigers and Devils series. Book 2 picks up a little down the track after the end of the first book, so it is important to read – or listen – to this series in order. I adore this series and have read it as it has been published. Being an Australian, I was attracted to a book that talks about something I am familiar with (although I don’t follow AFL it is impossible not to know something if you come from Australia – unless you’re New South Wales or Queensland, that is). It also sounds exactly like an Australian, it’s funny how much I realise Australian English is just sas ridiculous as US English. However, Kennedy writing, quirky and very well developed characters led to me falling in love with the first book of the series.

If you read my review for the audio book of the first book, it was clear that while I listened to and enjoyed the book, which I already knew I loved, to say I had a lot of problems with the narration is an understatement. However, with book 2 we have a new narrator, Dave Gilles. I’ve heard Gilles’ accent for a number of Renae Kaye’s books (set in Western Australia), so I knew what to expect and looked forward to his work. While he isn’t Australian he does an excellent accent and he has clearly done his research when it comes to pronunciation. Overall, it was a great performance and I honestly have nothing bad to say. Gilles did an awesome job giving voice to Simon and Declan, as well as their friends Roger, Fran, Abe and Lisa, as well as Nyssa, newcomer Cobie and Simon’s arch nemesis from book 1, Jasper Brunswick (real name Jon Brown). We are also introduced to a new character, the villain of the piece

Fans of the first book will not be disappointed with this sequel, Simon is as snarky as ever and Declan has come a long way from a closeted to openly gay football god to retired openly gay football god. Since injuries that have been plaguing Declan since book 1 forced his early retirement, the pain was too raw to go into coaching and so went to being a commentator and panellist for many of the numerous footy shows for a commercial television network (trust me, there’s A LOT of those IRL, and in my head it’s Channel 9 or 7 that he’s working at, haha). Simon has also had a career change, from being director of an indie film festival to a content producer for a LBGTQI community television station. However, after being together for three years Simon and Declan have to deal with their next big storm in the shape of Declan’s ex while he was still in the closet, a fellow AFL player. Simon and Declan go through their own ups and downs with Greg Heyward causing trouble with his media frenzy, maliciously dragging Simon into the mess and making him the bad guy. On top of that, we also see Simon’s pain and need to help his friends financially when he sees Fran and Roger go through hell when it comes to infertility preventing his best friends from starting a family.

It’s not difficult to feel for Simon as he tells the story. He gets a lot of shit thrown at him. And despite having the support of Declan, as well as Simon supporting Declan throughout the Heyward saga, Declan’s media silence over the various claims does hurt Simon. These guys still have and do a lot more growing as characters and as a couple throughout this book. The ups and downs make the guys really relatable and makes the relationship feel real.

Like the first book, this is great for fans of the sports romance genre. Although for fans of Simon and Murray and Declan Tyler, this a great continuation of their story.