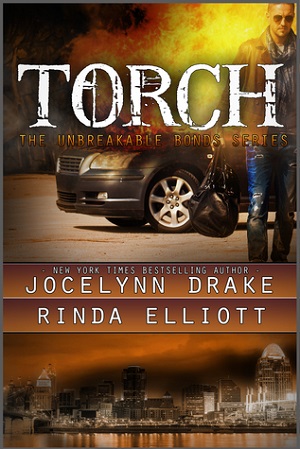 Blurb: Nine months ago, Rowan Ward thought he had it all. Now he’s fighting to pull his shredded life together, buried in work and battling the kind of grief that destroys a man’s soul. When fires spring up around Cincinnati threatening Rowe’s friends and clients, he’s thrilled to find his old Army buddy, Noah Keegan in town. They were a hell of a team when they served together, so in-sync, it was rumored they could read each other’s minds.

Noah thought devoting his life to the Army would be enough. Then he realized he had no family and only one friend he cared about. When his enlistment was up, he found himself standing on Rowe’s doorstep, looking only for friendship but secretly hoping for more. He needs to know if their one unbelievable night together years ago wasn’t a mistake.

Caught in a dangerous game of fire and bullets, neither expects the inferno of emotion that ignites between them. One Rowe isn’t prepared to accept. One that could break Noah.

Review: Rowe is still grieving for his wife when his old army buddy Noah shows up after leaving the military. The one time these men were together comes roaring back as long lost feelings are slowly rekindled. However, I have to say that even though I understood Rowe’s grief and reluctance with Noah it pissed off with the hot and cold game he played with him after each time they are together.

I did not figure Rowe to be someone to play with someones emotions after everything he had been through but that’s what it felt like he did until he got his head out of his ass. The threat to Rowe and the crew seemed never ending. Danger, action, suspense and some hot scenes are all throughout.

I was glad Rowe finally came to his senses considering how long Noah has had feelings for him. Even though I was mad at Rowe a good majority of the book I am happy with the end result.

The mystery part was outstanding in it’s explanations, planning out and execution. Fantastic read.