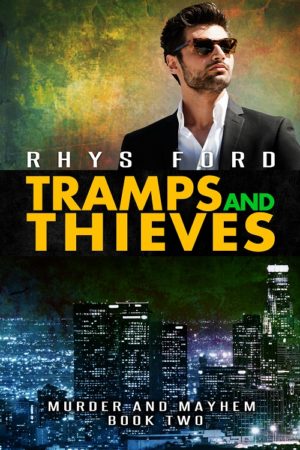 Blurb: Whoever said blood was thicker than water never stood in a pool of it.

Retiring from stealing priceless treasures seemed like a surefire way for Rook Stevens to stay on the right side of the law. The only cop in his life should have been his probably-boyfriend, Los Angeles Detective Dante Montoya, but that’s not how life—his life—is turning out. Instead, Rook ends up not only standing in a puddle of his cousin Harold’s blood but also being accused of Harold’s murder…and sleeping with Harold’s wife.

For Dante, loving the former thief means his once-normal life is now a sea of chaos, especially since Rook seems incapable of staying out of trouble—or keeping trouble from following him home. When Rook is tagged as a murder suspect by a narrow-focused West L.A. detective, Dante steps in to pull his lover out of the quagmire Rook’s landed in.

When the complicated investigation twists around on them, the dead begin to stack up, forcing the lovers to work together. Time isn’t on their side, and if they don’t find the killer before another murder, Dante will be visiting Rook in his prison cell—or at his grave.

Review: This series follows our same sexy couple so they need to be read in order. Normally I really can’t stand books that don’t change the main characters, but Rhys just has a way to keep my attention throughout it all, and without tearing my hair out.

Our sexy former cat burglar is getting a bit stir crazy, not going back to doing what he was good at. That is until he bids on a statue and wins, only to have his cousin swoop in and steal it. Well he didn’t steal it, but paid for it, then stole it. All the while grinning like a loon, boy was he going to be in for it. With the help of his cousin in law, he gets the codes and decides to get one more thrill and a bit of revenge. That should have been his first sign that things would not go the way he planned. His cousin was dead and now he is the prime suspect. He seems to always get in trouble, and he needs to learn how to duck. Another detective has a hard-on for him and not in the good way. It would seem his very own detective needs to help keep him alive as well.

Then the boddies start showing up, and damn if that grouchy asshat of a detective, well you will just have to read that part and see. Dante, his sexy cop boyfriend and lover, had always wanted Rook. He might not have wanted him the way he wants him now, but it sure does get interesting between them. He was in love with the charming, sexy, and crazy former cat burglar. Who would have guessed it.

You throw in his nutty family, and I am speaking about a cranky old grandfather who does not think before he opens big mouth. Those two can go at it, but you can also feel the love between them. There are quite a bit of twists to this story that will keep you on the edge of your seat throughout it all. What excitement, danger, hot sex, tender kisses and well you know where I am going with this, all in one dynamite package.

Just don’t eat before reading this, it can get quite grisly. I knew from the moment I read the first book, in another one of her series, that she was going to be my go to author for mysteries. She just has this way of telling a story and keeping you captivated, if not wanting to strangle the guys once in awhile.

I had a lot of fun reading this, even if it kept me up way past my bedtime. I can’t wait to get my hands on the next story. Way to go Rhys Ford for giving us this amazing book. I would definitely recommend it.