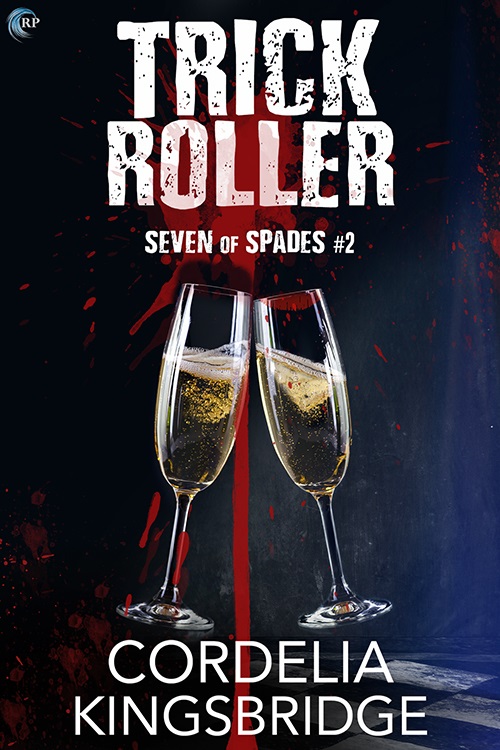 Thanks for checking out the blog tour for Trick Roller, the second book in the Seven of Spades series!

We rejoin Levi and Dominic three months after the events of Kill Game. Although most of Las Vegas believes the Seven of Spades is dead, our two heroes know better. It’s only a matter of time until the killer resurfaces…

“So it’s late, the girls have been in bed for a while, and I’m nodding off myself.” Dominic set his fork and knife on his empty plate and dropped his napkin on top. “I ended up falling asleep in front of the TV.”

Across the small table, Levi was leaning back in his chair, as casual and relaxed as he ever got—which was to say not very. His keen gray eyes were intent on Dominic’s face.

“I woke up with the sense that something wasn’t right,” Dominic said, continuing his story about babysitting his two young nieces. “Then I heard this kind of quiet, secretive giggling. And let me tell you, the last thing you want to hear when you wake up confused in the dark in a strange house is the sound of giggling children. Brings back the memory of every horror movie you’ve ever seen.”

The corner of Levi’s mouth tilted—a half smile that was for him what a broad grin would be for anyone else. Dominic took a moment to drink in the sight of it.

“But my mind cleared pretty quick, and I heard some sort of wet slapping noise on top of the giggling. I jumped up and ran to the girls’ room. Vinnie and his wife shop at Costco, and for God knows what reason, they’d bought this five-gallon jug of olive oil—”

“Yeah. Those two little miscreants had snuck out of bed, dragged the jug from the pantry to their bedroom, and dumped the oil out all over the carpet. They’d created their own Slip ’N Slide.”

Levi laughed quietly, and Dominic thrilled at the sound. Over the past few months, it had become his personal mission to make Levi laugh as often as possible. Levi was naturally solemn—not joyless, not by a long shot, but one of the most serious people Dominic had ever met. Bringing a smile to his face was a worthy feat in itself; getting him to laugh out loud was a deep source of pride.

“I almost didn’t want to stop them, because they were having the time of their lives. But responsibility won out in the end. I managed to get them both cleaned up and most of the oil off the walls and the furniture. The carpet had to be ripped out and replaced, though.” Dominic made a flourishing gesture with his hands. “And that’s why I’m currently on babysitting probation.”

His face still alight with amusement, Levi drank the last sip of his Boulevardier, the bourbon cocktail Dominic had introduced him to. He ordered one whenever he and Dominic went somewhere with a full bar, though half the time Dominic had to explain to the server or bartender in question how to make it.

“I don’t know if I would have done any better,” he said. “I’m terrible with children.”

“They’re teenagers. That’s different. I have a young niece and nephew myself, and I don’t know how to interact with them at all. Then again, I barely ever see them.”

Levi shrugged. “I don’t like going back to New Jersey, and my sister doesn’t want to bring them to Vegas.”

They both fell silent as their server approached to clear their plates. “Any dessert tonight, gentlemen?” she asked.

Dominic hesitated and glanced at Levi.

“Get dessert,” Levi said. “You know you want to. I’ll have coffee.”

After their server left, Dominic sat back in his chair with a warm sense of contentment. They were at Grape Street Café in downtown Summerlin, and on a Saturday night, there wasn’t a single open table in the contemporary, brick-lined dining room. The food had been great, the company incomparable.

His eyes traveled over the man in front of him. Levi had a narrow, wiry build, his clothes concealing most of the incredible, lean musculature carved by over a decade of intense dedication to Krav Maga. He’d been growing out his curly black hair a bit, and his razor-sharp bone structure gave him a hollow-cheeked look that Dominic adored.

There it was—the slight blush spreading across Levi’s cheeks as he turned his face aside with an eye roll and a tiny smile, embarrassed and pleased in equal measure. It was one of Dominic’s favorite expressions on him.

They’d been dating for three months now, and the more time they spent together, the more fascinated Dominic became. He could admit that he was the type of person who relished a challenge, and Levi . . . Levi was a storm of intriguing contradictions, cool on the outside and boiling hot within, aggressive as fuck in certain situations and painfully shy in others. He was intelligent and driven and, every now and then, so unselfconsciously sweet that it made Dominic’s chest hurt.

His dessert arrived along with Levi’s double espresso. Dominic watched him drink it, knowing he would have ordered a triple if he’d thought the restaurant would serve it to him.

“Sure you don’t want a bite?” Dominic asked, offering a forkful of profiteroles drowning in dark chocolate ganache and vanilla ice cream.

Levi eyed the fork askance. “I don’t really have a sweet tooth.”

“I know,” Dominic said, and grinned. “I kind of hate that about you.”

Levi gently kicked Dominic’s shin under the table, then left his foot there, pressed up against Dominic’s.

A short time later, they stood on the sidewalk in front of the restaurant, sweltering in the oppressive summer heat while they waited for the valet to bring Levi’s car around. Side by side, their physical differences were more pronounced. Levi was a tall man, just an inch under six feet, but Dominic was still half a foot taller. He was more heavily built as well, his muscles thick and brawny whereas Levi’s were lean and compact.

Dominic slid an arm around Levi’s waist and bent to kiss him, not caring that they were in public. Most people—sober people, anyway—tended to avoid starting shit with a man his size no matter how homophobic they were, and anyone who thought Levi would make an easier target was in for a nasty surprise.

When he started to pull back, Levi surprised him by catching the lapel of his dinner jacket and keeping him close.

“I want to spend the night with you.”

Levi had left Stanton Barclay, his boyfriend of three years, only the day before he and Dominic had slept together for the first time. They’d agreed to take things slow from that point on, so that Levi would have time to grieve his lost relationship without the complication of jumping headlong into a new one right off the bat.

Despite their best intentions, they hadn’t been able to quite keep their hands off each other in the weeks that followed. A few memories in particular stood out in Dominic’s mind—dry humping like teenagers on the couch in Levi’s new apartment, jerking each other off in Dominic’s kitchen when they were supposed to be cooking dinner, Levi sucking his cock in the front seat of his pickup. That last had been made ten times more exciting by the fact that Levi was a cop.

There were two firm lines they hadn’t crossed since April, however—no overnights and no penetrative sex.

Dominic had gone too long without responding. Levi let go and stepped away, a flicker of hurt and confusion crossing his face before it went blank. “You don’t want to?”

“Oh, I want to,” Dominic said honestly. God, did he want to. “That’s not even in question. I just want to make sure you’re ready for this.” He had doubts that three months was long enough to move past a serious relationship—but then, he’d never been in one of those himself, so what the hell did he know?

“Dominic.” Levi took his hand. “I want to be with you, move forward with you. I don’t want there to be any barriers between us anymore. I’m ready for that if you are.”

His expression was earnest, his voice sincere. After a moment’s consideration, Dominic reeled him back in and kissed him again. 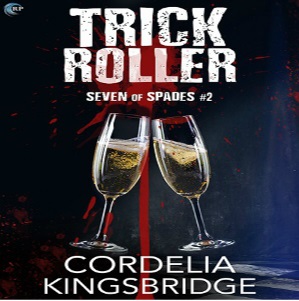 To celebrate the release of Trick Roller, one lucky winner will receive a $15 Riptide credit!

(Entries close at midnight, Eastern time, on February 3, 2018. Contest is NOT restricted to U.S. entries.)