Hiya guys, we have L.A. Witt popping in today with the tour for both the ebook and audiobook of For the Living, we have a great excerpt, a brilliant giveaway and Gigi’s review, so chekc out the post and enter the giveaway! <3 ~Pixie~ 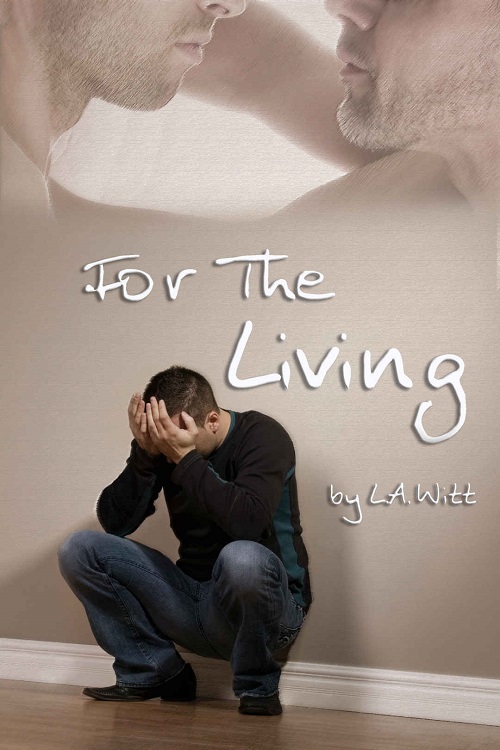 For the last year, Jay Warren has struggled to find the nerve to tell his wife he’s gay. Every time he gets the chance, though, he freezes up. He’s ashamed of hiding it all this time, he doesn’t want to hurt her, and the guilt has been almost unbearable.

Tonight, I’m going to tell her.

Yeah right. Just like I was going to tell her every night for the past several months. Probably creeping up on a year at this point. A year of long evenings of pacing back and forth across the living room or the kitchen, gesturing with my drink and talking to myself as I rehearsed the words that I had, to date, never been able to say in her presence. A year of psyching myself up and telling myself tonight was the night, only to lose my nerve the second she came through the front door.

Pacing back and forth across the living room, I sipped the double Seagram’s in my sweaty hand.

It didn’t help that she was late. Sure, it was more time for me to drink a little liquid courage and convince myself I could do this, but it was also more time for those ever-present doubts to get up on their respective soapboxes and tell me why I shouldn’t, couldn’t, wouldn’t.

“Do you really want to hurt her like that?”

“After this long, you’re an asshole for telling her now.”

I stopped pacing and rubbed my eyes with my thumb and forefinger.

Come on, Jay. She deserves the truth.

She deserved the truth a long time ago. And every time I passed up an opportunity to tell her, the guilt just burned deeper. One more day of leading her on. One more day of pretending the problems plaguing our marriage could be resolved with just a little more time and patience.

I cursed under my breath, then took another long drink. I put the glass on a coaster on the coffee table—Misty hated rings on the table—and kept pacing along that path I’d worn into the carpet in front of the fireplace.

I glanced at my watch. It was well after nine, and she was always home by eight-thirty.

Maybe her class had run late. Her professor’s lectures were always precisely two hours long, so if class started late, it ended late. There’d been a massive car accident on the freeway earlier this evening—a multiple fatality, from what the traffic reporter said—so maybe that had held things up. But an hour or more late? Even that prof wouldn’t hold his class that long.

Her study group wasn’t meeting tonight, was it? They always got together after class and sometimes didn’t finish up until ten or eleven. I picked up my drink again and closed my eyes as I held the ice-cold glass to my forehead, wracking my brain as I tried to remember if they were meeting on Wednesdays or Thursdays this quarter. She’d probably told me earlier. Might have even e-mailed me at work to remind me. I was just too far into this bottle and a night of undoubtedly futile self pep talks to remember.

Better check with her, then, since I wasn’t going to find the answer in my own nervous, slightly intoxicated mind, so I speed-dialed her cell. It rang several times, then kicked over to voice mail.

“Hey, this is Misty. I’m probably at work, in class, or just plain not answering, so leave a message and I’ll call you back.”

I cleared my throat. “Hey, it’s me. I can’t remember if you’ve got study group tonight or not, so I wasn’t sure when you’d be home, but give me a call when you’re on your way. Talk to you soon. Love you.”

I winced at the last two words. Sighing, I hung up the phone and set it beside the coaster on the coffee table. It wasn’t a lie. I did love her. I would love her until the day I died, and never questioned that for a second.

But was I in love with her?

And the longer I dragged this out, the more she’d hate me when she finally learned the truth that I had owed her for a long, long time.

I brought the glass up to my lips, but hesitated. I’d had enough for one night. No sense being legitimately drunk when she got home. For one thing, we’d end up fighting. Misty didn’t mind me drinking, but the second the alcohol showed itself in my speech or gait, she got pissed. I couldn’t even count the number of times a fight about my drinking had been the convenient excuse not to discuss the reason I’d been drinking in the first place.

Come on, Jay. You can do this.

I also needed a clear head. Well, as close to a clear head as I could get. If I stopped drinking now, I might even be completely sober by the time she came home from study group.

I stood, leaving my glass on the coaster beside my phone, and resumed pacing between the coffee table and fireplace.

A million images of my wife flickered through my mind, each reacting a different way. One cussing me out. One collapsing into tears. One getting herself a very, very strong drink.

And why didn’t you tell her, Jay?

Same answers, different night. And when she came home, I’d choke just like I always did. God, how long was this going to go on?

The longer you wait, the worse it’s going to get.

I sank onto the sofa and rested my elbows on my knees. Rubbing the back of my neck, I sighed, wondering how long I could resist the siren’s call of that mostly empty glass on the table. My willpower was melting faster than the neglected ice cubes. I wanted to say to hell with it and chalk up tonight as another failed attempt to work up the courage to tell her, and I wanted to celebrate that failure with this glass and at least two or three more afterward. So what if we fought? Maybe if we did enough fighting, we could divorce over that instead of this.

My shoulders slumped, and I pressed my fingers into my temples. Who was I kidding? I didn’t want to hurt her. I had to, I knew that, but not by picking fights and giving us a reason to scream at each other until we could tick the “irreconcilable differences” box and move on. She deserved better than that.

She deserves better than me.

Fuck it. I picked up the glass and threw it back, swallowing the whisky in one go, barely tasting how much the melted ice had watered it down. The remaining ice clinked halfheartedly as I put the glass back on the table.

I shot the front door a suspicious glance, then looked at my watch. Who the hell showed up at

Jesus, how the hell was it already nine fifty-seven at night?

Something tightened in my gut. I glanced at my cell phone, which remained still and silent on the coffee table beside my glass. Heart pounding, I started toward the door, and with every step, that something tightened. The hairs on the back of my neck stood on end. The deadbolt had never clicked quite as loudly as it did when I turned it.

I opened the door, and when I saw the pair of somber-faced cops on the porch with their hats in their hands, I knew. 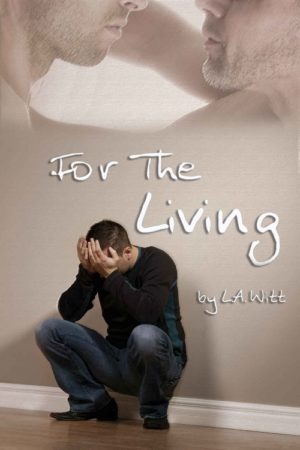 Title: For the Living, (3rd edition)

Review: I can’t imagine Jay’s regret, but the author does a pretty good job. I know that emotions are powerful and distracting after the death of a loved one, so it was not unrealistic of Jay to find himself quickly attached to Scott right away.

The attraction between the two seems natural, quickly developing and the sexual tension hot for many reasons. From natural chemistry to Jay’s restraint and denial all these years.

The turmoil between family members, when someone dies in an unexpected and tragic way, is often unexpected, hurtful and even violent. So it was not surprising to see how Jays’ in-laws treated him. I even understood what his in-laws were feeling.

The real interesting part of this plot was how the writer even has me as a reader in denial about Jay’s motives and feelings. To miss the fact that he was not grieving the real loss here and possibly using Scott as a distraction, which was silently lurking in the background the whole time and the eventual blowup…that was the climax of this story.

A fast read and a quick romance, For the Living had some nail-biting moments along with some very steamy scenes and warm and fuzzy relationship developments. Witt had my attention though the whole plot. A good rainy weather read for sure.