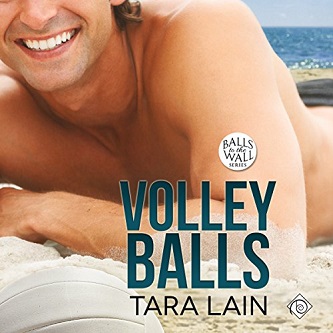 Series: Balls to the Wall 01

Blurb: A “pumped up” version of the Volley Balls story, twice as long as the original.

A double dose of alpha male might be better than one.

Despite just getting out of an abusive relationship with an asshole alpha, David Underwood’s wandering glance lands on two hot members of the Australian volleyball team on Laguna Beach and gets him harassed again. Still, when the delicious Gareth Marshall proves his interest by coming out to his team, David succumbs to his attraction. But Gareth’s volleyball partner, Edge, who’s equally hot, makes the lovers’ lives miserable.

For Gareth, a lifetime of hiding his orientation – and his attraction – from his best friend, Edge, as well as everyone else around him, adds up to hurt and frustration. David’s the first man to ever compete with Edge for Gareth’s passion. But Edge has secrets of his own, and David’s ex-lover will never be happy without David under his fist. With everything stacked against him, can a gay Laguna man find happiness with an alpha male – or two?

Review: Volley Balls is the first book in Tara Lain’s Balls to the Wall series, set in idyllic Laguna Beach (much like her series Love in Laguna, and I think the Love You So series, too). The way I understand it, this is a revised and expanded edition of the story, although I’ve had no prior knowledge of it before listening to the audio. I was interested, however, because I have enjoyed a number of other books and series of Lain (like those already mentioned). I’ve found it very easy to connect to Lain’s characters and get so easily invested into their storylines. So I thought that this would be a no-brainer – a cool, short story to get into to pass some time. As always when I see something involving Australia or Australian characters, that was just the icing on the cake for me to get into the story.

Before I break this down further, let me get into the plot of this story.

An Australian volleyball team is in Laguna, two of the guys are Gareth and Edge. Gareth and Edge have been friends for years. But Gareth has stayed closeted for fear of what his teammates and his best friend would say if they found out he is gay. His actions appear justified when his team and Edge are homophobic a*holes, not holding back calling men names such as fairy.

But Gareth has caught the attention of David Underwood, and vice versa. David is a sweet, down to earth guy and has major concerns about what it would mean to get involved with a closeted volley ball player whose friends who are horrible, homophobic and even seem to border on psychotic (though I am sure that was just a way to get the story moving forward).

Then there is Edge. Gareth’s best friend and the man that could prevent David and Gareth from being together, completely in love. Edge is jealous and doesn’t know how to deal with his emotions when it comes to Gareth, who has been his best friend and so much more for so many years. To me, Edge is the most difficult character, because his actions are so full of venom and at times manipulative it is then hard for me as the reader to understand his about face which leads Gareth and David opening their minds to a different kind of relationship.

As you can now probably guess, my biggest issue in this book is Edge. While I liked David and Gareth together and felt the connection and potential between the characters, I felt that the addition of Edge into the relationship was tacked onto the end. Although, to be honest, I don’t feel that there was a lot of character development to fully understand the motivations of each of the guys, especially Edge. I normally love MM menage romances but I found it difficult to believe Edge’s connection and chemistry when he was so full of hate and venom. I’m not sure, part of me kind of thinks that if the book was longer and that if there was significantly more character development this book would be better, and Edge could be more relatable.

My feelings for this book are so intense that I’m not just getting to the narration and tacking that onto the end of the book. To be honest, it was the narration by Nick J Russo that kept me going. I’ve heard Russo’s work in the past and so I didn’t have any concerns there. He does a great job with the characters, even does a fairly good Aussie accent for Gareth and Edge. For me, while his performance couldn’t fully redeem the book in my eyes (because there are some books that I just can’t read but totally love the same book when I listen to the audio), his performance was great.

Despite my issues with the book, I am certain there are many people that would love this – I mean, I’ve read other reviews that show just that. I recommend this to people that want a very sexy book, with tonnes of steamy sex scenes, menage/poly romances and a relationship that is best described as instalove.