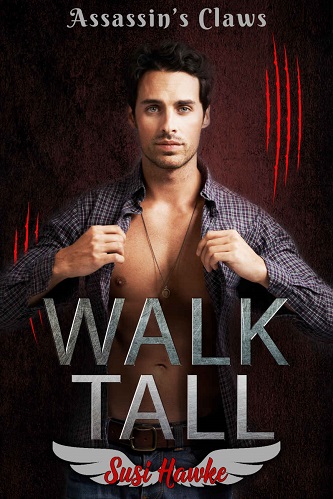 Blurb: Clay Moreno is a paid killer, just like his four brothers. It’s the family business—they fight together, they die together. Whether they’re working as a group or alone, they are a tight unit who protect their own.

Clay drew the short straw on their latest mission: assassinate the American president. He knew the case was going to be tough, but the last thing he expected to find was his mate… the president’s own son. The fact that he began the case with plans to seduce his way into the White House via that same son is beside the point. What his mate doesn’t know shouldn’t hurt him…

Nick Jackson is lonely and ordinary in a family of overachievers. He doesn’t want to do photo ops for the press, prep for the next year’s tests over the summer or any of the hundreds of other things his mother hassles him about. All he wants is to relax after his first year of college, work on his tan… and maybe find a boy to flirt with.

Review: Someone is about to tell the world about shifters. It is up to Clay to make sure that doesn’t happen. Even if it means he is going to have to kill the President of the United States. Now only he had to figure out a way to do it.

Nick is the son of the president and hates being in the spot light. He only wants a man to love, a family and the white picket fence. When he meets Clay things are looking up. Then he finds out that Clay is trying to kill his father. Clay is a shifter and Nick is his mate so it is going to get even more interesting.

The thing about these stories is that they are not really as short as the author states they are. So in reality there was no reason the ending couldn’t have included the surprise. It drives me nuts and actually does the exact opposite of what an author intends. Which is to look forward to the next story. I tend to stay away from stories that leave a cliff hanger.

Now for the main issue, no one in a world would send a text detailing all of the plan. It came off as if the story needed to be rushed. There was a reason to let Nick know the truth but no handler or assassin would be stupid enough to leave that type of evidence floating around.

The story started off quite interesting and had it not been for the text, might have been a higher rating for me. Things moved way too fast to make it believable as well. It went straight to sex, then more sex, then meeting the family and no true focus on what was suppose to happen till bam the assassination. Also assassinating bunnies in bunny form is a bit goofy and dropped the story as well.

Overall the story might have had a good chance to stand out, but some of the actions written in made the story burn. I can’t say that I will be looking for the next story and can honestly say that it is one that will be read only once.