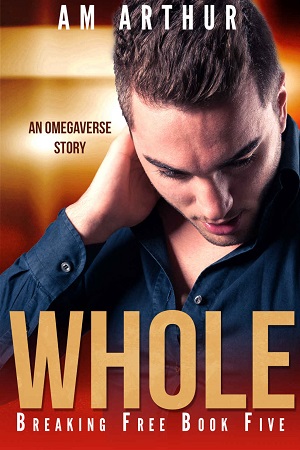 Alpha Morris Danvers likes his quiet life as a paralegal and as the uncle to his beta brother Morgan’s infant son Aeron. Raised by an abusive sire, Morris and Morgan have relied on each other for years, and Morris doesn’t trust himself to do right by an omega mate. When a tragic accident leaves Morris alone to raise a baby, he reaches out to his boss Ronin Cross for help—and gets more help than he ever imagined from Ronin’s mate and their friends. But Morris can’t take bereavement leave forever and Aeron needs a caregiver.

After surviving an abduction and months of torture, all omega Jaysan Rowe wanted was to give away the baby he never asked for and move on. But after months of acting out, Jaysan finally hits rock bottom on the one-year anniversary of his child’s birth. Desperate to get his act together, he meets with an alpha who needs full-time daycare for his infant nephew. But the instant Jaysan sets his sights on little Aeron he knows: Aeron is his biological child. Even Morris’s nose can tell the pair belongs to each other. His nose also tells him something even more shocking: Jaysan is his bondmate.

Both men feel the bond, but neither is ready to mate, period, so they come to a business arrangement. Jaysan wants a relationship with Aeron, and Morris needs a sitter. It should have been perfect, except for that pesky mating bond. A bond that draws them together, over and over, no matter how hard each man fights it. Jaysan swore long ago he’d never mate or let another alpha touch him during heat—except everything about Morris makes him feel safe. Wanted. Whole. But Morris deserves an unsoiled mate, not someone as dirty and used as Jaysan, and Jaysan will do anything to prove it to the stubborn alpha…even if it means giving up his son a second time.

NOTE: This is a non-shifter Omegaverse story with alpha/omega/beta dynamics, heats, knotting, and mpreg. In this world, omegas are second-class citizens with few civil rights and almost no protections under the law. Trigger warnings for physical, emotional, and sexual abuse. This series is best read in numerical order.

Review: Morris loses his older brother to a car accident and finds he is the guardian of their son Aeron. Jaysan has mourned the fact that he gave his child up for adoption the day he was born. Kell tells Jaysan about someone needing a sitter so Jaysan goes to the interview. When he arrives he meets Morris and feels a bond. But more importantly he finds his son.

Jayson and Morris fight the bond between them every step of the way. I was flabbergasted at the lengths Jaysan went to make Morris see he was not interested but understood his reasoning. I love this story about two broken men who find light at the end of a tunnel in each other.

There was many ups and downs for these two along the way. Their friends help them out along the journey to finding happiness. I am in awe of this series. The only problem I’ve seen so far is couple of spelling errors in each book. Other than it’s wonderful.

I can see several more books in this series with certain characters coupled up.