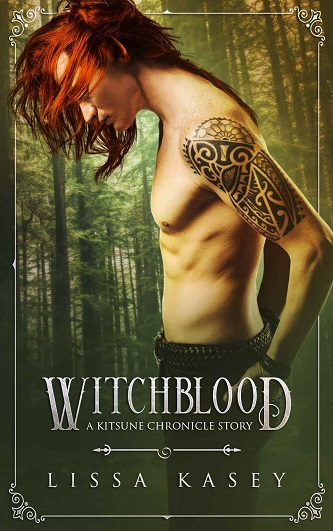 Blurb: Sebastian Volkov, a fox shifter raised among werewolves, ran from everything he ever loved after a brutal attack that left him fearing his own shadow. That night a single kiss saved his life and left him with fantasies of a man whose face he couldn’t remember. When Sebastian’s car breaks down in a small Washington town, he meets an Alpha werewolf who reminds him vaguely of a stranger’s kiss.

A year ago Liam Ulrich, Alpha of the Northern Cascade’s Pack, shared a magic filled kiss with a virtual stranger, the infamous Witchblood child of the most powerful werewolf in the world. Since that night, Liam has been waiting for Sebastian to find his way home. Liam knows that Sebastian doesn’t trust easily, or at all, so he’s going to have to give his prickly mate time and space.

The past Sebastian tried to escape still stalks him and slowing down gives it time to catch up.
When the werewolves’ ultimate enemy rises up to cast its shadow over them all, Sebastian realizes he will have to stop running or risk losing everything…. including his hope of a future with Liam.

Edit: Edition updated to reflect minor character changes, grammatical corrections and a removal of about 500 words.

Review: I really enjoyed this story about Sebastian and Liam. Sebastian is witchblood with kitsune in him as well. The story starts with him about to die after a brutal attack and a mysterious stranger saves him. Years later he meets the stranger again but does not remember him right away.

This story had a lot going on in it. I loved the suspense and mystery surrounding Sebastian. But I will admit to wanting to know what happened to Nicky for sure instead of Sebastian guessing. That was never answered.

A mix of drama, suspense and action this story delivers an interesting story to be sure. I will admit to being lost a couple of times throughout as it seemed to jump from one thing to another out of the blue aside from that it was a good intense beginning to a series.