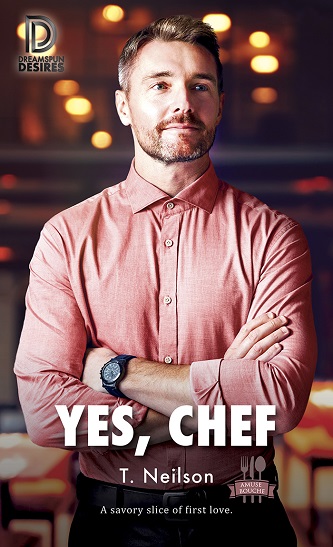 Simon’s dad died when he was young, leaving Simon to take the reins of the family restaurant business—and the responsibility for his mother and brothers. His commitment to his duty left Simon time for little else, least of all romance.

Argentinian celebrity chef Luke Ferreya has wanted Simon since their culinary-school days, but for Simon, family always came first. Now Luke’s back in Simon’s life—briefly before he returns to South America—and he’s determined to give Simon a sample of everything he’s missed out on.

Simon’s brothers are grown, and his mother is doing fine on her own, and Luke is offering a second chance for a future full of the pleasures of fine food, wine, and especially love. Without his obligations to hide behind, can Simon finally allow himself to say “Yes, Chef”?

Review: Yes, Chef is the second book in T. Nielson’s series Amuse Bouche, for Dreamspun Desires. I have to admit that I didn’t even realise that there was a book one to this book until I started reading, and to be perfectly honest I can’t remember if I picked up on the fact that this was a series when I read book one some months ago. However, when I did realise it, I was looking forward to it because I did really enjoy Sweet Nothings.

Yes, Chef does work as a standalone book, although there is a number of references/appearances to the couple from book one, considering that the MC, Simon, is the older brother to Tristan from book one.

Simon Love (I assume his last name is love since he is older brother to Tristan Love), has something of a chip on his shoulders. We met him briefly during his brother’s story and he was an arsehole, although to give him a break he did have his brother’s best interests at heart, the problem was that he didn’t understand his little brother and has a clear dislike for Tristan’s boyfriend. The whole family seems to be involved in the restaurant industry, and that is also evident in that Tristan was opening a bakery in book one. This pretty much sums up Simon, after his father died when he and his siblings were still kids, Simon as the older brother took up the mantle to try and fill the void in the family. He took it to extremes, because although he pursued his dreams and went onto become a chef, he allowed his life to remain on hold. This is particularly true when events during culinary had him turning tail and returning to his family, but nevertheless ending up taking lead in the family’s restaurant.

Simon knows Luke Ferreya from culinary school. Luke is Argentinian and has been in New York where he had become a two Michelin Star chef. However, Luke is suffering burn out from being a celebrity and has decided to leave that life behind. He wonders if he has a life in Argentina on his family ranch/farm, but he is making a detour to catch up with Simon to see if there is something else that could keep him. Something that is infinitely more exciting than going back to join his family’s business.

Other than Tristian popping up, there really isn’t much more from the family. I vaguely remember at least one other brother and a mother when I read book one, but there was nothing even from them. Of course, it wasn’t relevant to the story. I’m just wondering if there is going to be more in this series!

This is a really sweet, low angst story. I liked it because the whole point of the story was that Simon had to grow and learn not to be afraid of his thoughts and feelings, while Luke had to figure out what was the next thing in his life that would bring him happiness. Of course, Luke had an idea but both he and Simon had to grow a bit more.