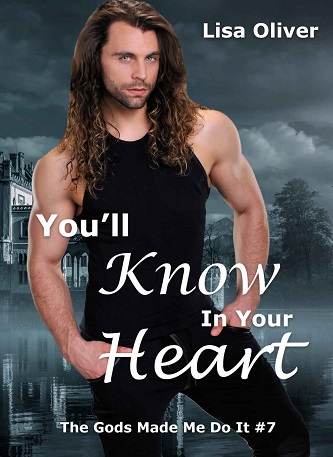 Title: You’ll Know In Your Heart

Blurb: Baby, youngest son of Poseidon had started to avoid going anywhere near his family. Between love-struck mates, and tiny children, more and more he was starting to feel as if he just didn’t fit. Anywhere. Abandoned by one father at birth, and pretty much ignored by the other, Baby roamed the world, looking for some kind of acceptance, but all he could find was hook ups. And there were plenty of those. Being the son of Himeros, the god of desire as well, wasn’t all it was cracked up to be. But none of the people he saw for brief moments touched his heart, and most of them never wanted him to stay longer than an hour or two at most.

Owen was known by many names, but the one title he’d spent a long time avoiding was that of “Baby’s mate”. Having known who his mate was from Baby’s birth, Owen had stayed hidden away from life, content to watch his mate through his Oracle stone, until more than a thousand years had past. When the destructive behavior he believed Baby was falling into got worse, Owen knew it was time to step in. Baby needed a fixer, and the Fates had given Owen the job.

But Baby didn’t want to be fixed. In fact, he resented the very idea, which meant Owen needed to make a few attitude adjustments. As the two men bumbled along, struggling to find common ground with each other long enough to make a mating work, they weren’t getting any support from Poseidon, Claude or Himeros. When Baby gets another shock, he seriously starts to think hiding in an isolated cave somewhere was a good idea. The question is – will he take Owen with him?

Review: Baby is Poseidon and Himeros son but you would not be able to tell it. Himeros is one hell of a selfish man, dumping him on Poseidon as a new born. He only came around lately because his son is as beautiful as always and the people wanted him. Where as Poseidon was a man whore until he met his fated mate. Even then he still is not warm and cuddly to his older sons. He was a child not raised in warmth or loving arms, abandoned and ignored. He just wanted someone to love him. Instead it caused fights and tempers to rail. Then a god older than even he could conceive showed up and told him they were fated mates. That Owen knew they were fated mates for over a thousand years. Imagine what that does to Baby.

Owen is a god and powerful one. He has always been alone except for one other. He knew from the moment Baby had been born that he was his. However time gets away from even a god, now he has a lot of making up for.

A lot of people said that this was going to be quite different then the others in this series, but truthfully I did not see it. Baby was as sweet as always and lets face it his fathers needed their heads knocked into the wall. They couldn’t even give him a true name, just the baby of the family, so it stuck. I did like Owen but even he needed to be knocked upside the head a few times. I liked how they stood up for each other and to each other.

I had a lot of fun reading this and look forward to the next story. I can guarantee that this will be read many times over. In fact I think I will read it again now. Baby times three is a good ending.