Hi guys! We have Brad Shreve stopping by today with his new release A Body In A Bathhouse, we have a great excerpt and a brilliant $10 Amazon GC giveaway so check out the post and enter the giveaway! ❤ ~Pixie~ 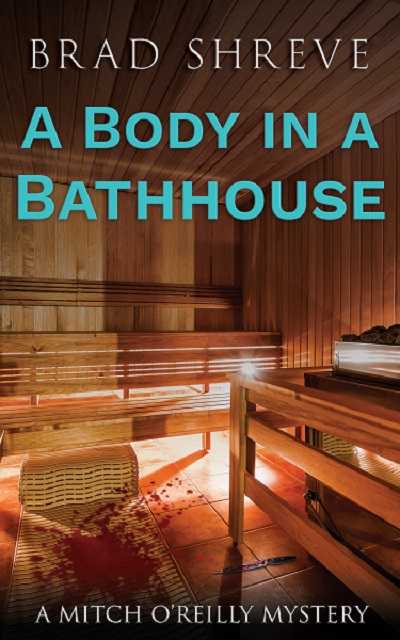 A Body In A Bathhouse

On the verge of bankruptcy, private investigator, Mitch O’Reilly takes any gig that comes his way, while running his Eye Spy Supply shop in a forgotten Los Angeles strip mall. After two tours in Afghanistan, Mitch’s life amounts to operating his store, coping with his fun-loving sister, Josie, and scoring with anonymous men he meets online. That changes when he gets a break. A beloved comedy scriptwriter is murdered at a bathhouse, and Mitch is hired to prove the innocence of the club custodian. Adapting from a two-bit gumshoe to a high-profile sleuth proves more challenging than he expected.

As if Mitch didn’t have enough to deal with, charismatic bathhouse operator, Trent Nakos, enters his life. After a heartbreaking past, the manager is the definition of a man the brooding P.I. actively avoids.

Following leads from sprawling mansions to sketchy hoods is demanding but becomes more troublesome when deadly threats jeopardize the biggest opportunity of his career. Trance music, which I hate, blared into the streets from the club. Since I hadn’t been dancing in West Hollywood since college, walking into Euphoria was surreal. The faces were different, but nothing had changed.

The bartender yelled over the music, “What can I get for you?”

“A Rolling Rock,” I yelled back. I gave him my credit card and told him I’d run a tab.

Near the bar was a platform where a go-go boy was dancing. He was young, scrawny, pasty white, and had a red mohawk. The crowd paid no attention, and he frowned. I made a mental note to tip him on my way out.

Further back in the bar, another dancer dominated the crowd’s attention. I recognized his rich, dark, perfectly defined body from Club Silver Lake’s security videos. What got him the most attention was what he was packing below. His thong had to have been custom made. It wasn’t possible for him to fit into something off the shelf.

“Is that Christian?” I yelled to the bartender.

“If you’re asking, you must be from out of town, or you don’t get out much,” he hollered back.

“A tequila shot with a Corona chaser.”

“Set them up for me for his next break,” I said, thinking it might be necessary to loosen him up before questioning.

I grabbed the three drinks—his tequila and chaser, and my beer—and moved to a table near Christian. He rolled his magnificent stomach, then turned and shook his bubble butt at the crowd. Cheers drowned the music as he played with his honey-colored thong—pulling it down just enough to throw them into a frenzy, then raising it again to groans of disappointment. His face was rugged yet boyish with his wide smile and deep dimples. The bucks were flying.

Christian stepped off the platform as I downed the last of my beer. I grabbed his drinks and rushed behind him, through the rows of sweaty men, to the back of the bar. I was too slow. He entered his dressing room before I could catch him.

The door opened. “What?”

“I ordered these for you.”

He took the tequila shot from my hand and downed it, then grabbed the beer. “Thanks,” he snapped and closed the door.

The door flew open. “Thanks for the drinks,” he shouted, “but I’m on break and need my space.”

I narrowly escaped him cutting off my hand as he slammed the door shut.

I was shocked that he actually opened the door when I knocked again, and I stuck out my foot so he couldn’t slam it again. “Not to disappoint you, but I’m not here as a fan. I’m the private investigator hired to look into Victor Verboom’s murder.”

He took the business card I held out and tossed to the floor. The room was nothing more than a closet with a single wooden chair, and a bookcase stacked with clothing.

“You were at Club Silver Lake the night he was murdered.”

“Yeah. What of it?” His voice was smoky.

“I’m meeting with all the suspects.”

He turned his head quickly. “I’m a suspect?”

“You were there, weren’t you?”

“Uh, yes.” He looked back and forth through the club and took a step back. “I’ll put some clothes on, and we’ll go to my car. Meet me out front.”

I wasn’t on the sidewalk long before he trotted out wearing jeans and a white tank top. He motioned me to follow him to a light blue Mustang. It looked new. “When I can’t get any peace in there, I come out here on my breaks.”

“Nice car. Not a bad ride for a nightclub dancer. You must do pretty well on that platform.”

“Screw the car. What do you want?” After growing up in Michigan and North Carolina, Brad Shreve criss-crossed the country while working in the hotel industry. In addition to working in hotels as a bellman, front desk clerk, and reservation call center director, he’s managed coffee houses, waited tables, sold potato chips off a truck and even hocked pre-burial funeral plans.

He credits Where the Wild Things Are by Maurice Sendak for developing his interest in art and storytelling. He’d spend hours on the floor sketching and painting and writing stories. My Side of the Mountain by Jean Craighead George gave him his first inklings that he’d like to be a novelist someday.

In addition to perpetually thinking of how to kill people, he’s a proud dad, a beach bum, and coffee house squatter.

He currently lives in the Los Angeles South Bay with his husband, Maurice.