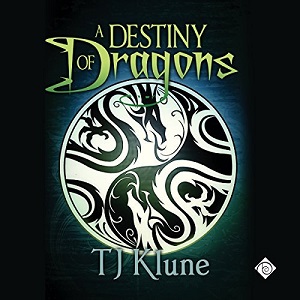 Title: A Destiny of Dragons

Blurb: Once upon a time, the wizard’s apprentice, Sam of Wilds, got his happily ever after in the arms of his cornerstone, Knight Commander Ryan Foxheart. A year has passed, and while Sam’s been captured five or six more times since then, things are pretty great. His parents are happy, Gary and Tiggy still eat sass for breakfast, Randall is somehow alive despite being older than the gods, the King rules with a gentle hand, Kevin the dragon is as gross as ever, Morgan sighs a lot, Ryan continues to be dashing and immaculate, and Sam is close to convincing Prince Jus-tin they will be best friends forever. Life is good.

Because Vadoma, the leader of the gypsy clan and Sam’s grandmother, has come to the City of Lockes with a dire prophecy written in the stars: a man of shadows is rising and will consume the world unless Sam faces his destiny and gathers the five dragons of Verania at his side.

And she brings along her second-in-command, a man named Ruv. Ruv, who Vadoma says is Sam’s true cornerstone.

Review: I absolutely adore TJ Klune. I adore just about every book he writes. I love how he can make a reader laugh and cry within the same book within pages of each other. But mostly I love how he can keep an audience entertained where I am, more often than not, laughing throughout a book, and in the case of audio books I’m often on public transport trying not to be obvious. However, that also applies for when I’m on public transport and trying not to cry.

That being said, there are a few of his books which I’ve not really connected with when I first read them and never went back. The Lightning Struck Heart, the first book in the Tales of Verania series, was one of them. However, I’ve seen the light, I gave it another go and absolutely fell in love (for this reason my review of book 1 is quite long, but I promise to tame reviews for the rest of the series). So here I am, at the end of book 2, A Density of Dragons, in the Tales of Verania series and ready to continue.

This series is an epic saga so it is vital to read this series from the start and not do it out of order either.

A Destiny of Dragons picks up where we left off at the end of book one. Sam and Ryan (aka Knight Delicious Face, which I say in my head in the voice lent to Tiggy by Michael Lesley) are finally together, but Sam still has the tendency to get into trouble. His friends are as whacky as ever and part of Sam’s antics is to become Prince Justin’s “best friend 5eva” and help him find love. This is sort of changed when Sam’s estranged gypsy grandmother, Vadoma, makes an appearance and reveals that Sam’s fate and his importance to Verania is something prophesised and essential to the survival of the people. I mean, this just shows that Sam is always getting into trouble for a reason. This book is the start of what I can already see is going to be a long, winding and very hard road for our hero, which is uplifted by continual moments of hilarity. Once again, Gary, Kevin and Tiggy are wonderful highlights of the book as they help Sam, and by extension Ryan too, start to unravel the extent of what is about to shake the foundations of their world.

As with the first book, and I suspect with the next two books of the series, Michael Lesley’s is an absolute joy. For me, I call a book which is laying in a lot of groundwork for the complex storylines to follow a “filler book”. As a very general rule, I find the even numbered books in these complex type series good not as good as the odd numbered books. Mostly because these books feel like they have a less meaty plot but are absolutely necessary. I’m saying this because Lesley’s narration kept me hooked and I never once got tempted to skip through scenes or chapters.

Lesley’s delivery of the story itself was just as brilliant as the first book. He carried on the distinct voices that he gave to all the characters in that instalment. He wonderfully articulates the emotion in the characters as they go through their highs and lows. Seriously, this is audio bliss.