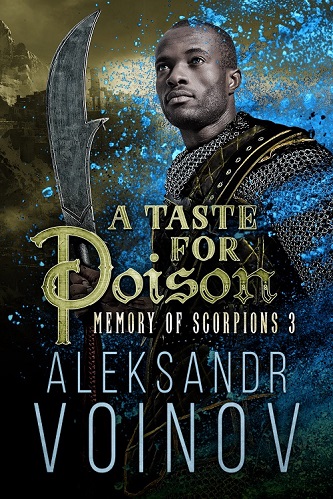 Title: A Taste for Poison

Blurb: Even a king gets stung when he reaches for a scorpion.

After barely surviving an assassination attempt, King Adrastes is a changed man—one who mistrusts even his allies and friends. He readies his empire for war against an enigmatic enemy, the Elder of Vededrin, but not everyone approves. While courtiers dare only to whisper dissent, an outrider called Death foments rebellion in the mountains, aided by a prophecy that promises he’ll stop the Black King.

Kendras—former lover to Adrastes and leader of the Scorpions—is sent with his elite mercenary force to bring Death to justice. But when Kendras learns who’s hiding behind the mask, he must choose between his lover Graukar, newly appointed general to the king—and King Adrastes himself.

With no man to call master, the Scorpions could flee the danger and intrigue. But Kendras cannot abandon the man he once loved—or the man he’s growing to love—without first uncovering the real threat to the Empire.

Review: I think it took me forever to find the time and finally finish this book. I seriously hated real life for stealing my time away, but I made it and *sigh* now I’m going to have to go over yet another book-hangover. It’s a thing with Voinov’s books and me, happens almost every time.

A Taste for Poison is the third and final book of the Memory of Scorpions universe, though rumour has it that Voinov is considering writing some shorts about some characters. As a fan, I truly hope it’ll happen.

So back to this book, yet again we were graced with a strong story, capable of grabbing your brain and imprisoning it in the depths of the plot. Action, blood, gore. Love, lust, passion. Jealousy, pain, fury. Intrigues, betrayals, back-stabbings.

More often than not, I felt like living in the story and I can’t begin to tell you how wonderful a feeling that is. The intensity of the storytelling is spectacular and leaves you without breath. Expect heart palpitations, heartbreaks, and even a tear shedding or two. Also, expect the sizzling hot passion and the one-of-the-kind love manifestation Voinov is so famous for being able to recreate in writing. And if you think you won’t get bat-shit-crazy mad with characters and events, think again.

The story itself takes a turn and what we suspected in book #2 became reality. It shifted from having Adrastes as the main person of Kendras’s interest to Graukar and while that was expected it managed to shock us with what Graukar suffers in the path of Adrastes’s fury. It will make you cringe and shudder, but it’s well worth it and raises the tension of the story way above high. It made Kendras look so damn good in my eyes too and I think it was about time, as he left me with an uneasy feeling in book #2.

Other than that, I don’t think I need to point out the quality of this book. Anyone who has read a book from Aleksandr Voinov knows to expect only the best. Wonderful editing work, fonts and presentation always making you feel like you’re reading a paperback. There are times I wonder why I can’t smell the pages and I laugh at myself. But you get the point. It’s so nice to have to focus only in the story without having minor details, such as typos or poor proofing, take your concentration away.

In the end, all there is to add here is; if you are not acquainted with the Memory of Scorpions universe I strongly recommend it to you.