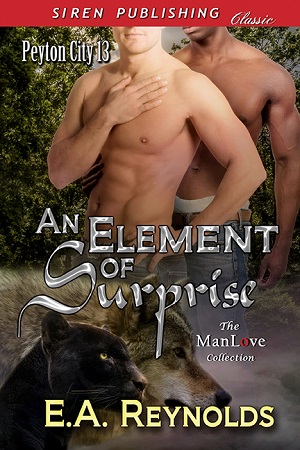 Title: An Element of Surprise

Blurb: Raiden is sent on what he thinks is a routine retrieval mission. When he arrives, he finds destruction and nearly dies as he finds his mate. Alimi is a soldier by profession with no intentions of settling down, but on a favor and an order from his alpha, he’s sent on a rescue mission. Little does he realize he’s on a collision course with his mate, who nearly dies on site.

Alimi isn’t in any hurry for a mate, but he’s not about to allow his one chance at happiness and love to pass him by. At the same time, he’s worried his mate could die on the front lines of the conflict. So, he gives him light duty until he has put him in harm’s way.

Raiden is more than eager to build a relationship with Alimi. Still, he questions Alimi’s decisions as a leader and that doubt just might prevent him from claiming his mate.

Review: Each book in the Peyton City collection features a new romantic couple. To enjoy the overall story arc and crossover characters, I would recommend reading the series in sequential order.

The war is getting even harder to win, especially when the coyote’s and jackals get involved. Alimi is in charge of keeping one sectioned safe but even he knew that it was probably impossible. He was a hard core soldier and knew that death was the only way for those he is fighting. Then in walks his mate, and the things he once thought went out the window.

Raiden is not what I expected. He is not as hard core as his mate, but he is damn protective of his mate. What he thought was a routine mission has turned into a freaking nightmare. However he knows that the one person he wants the most had better survive.

The story and its previous ones are quite unique and surprising. It is a very complex story that involves not only the two characters you are reading about, but many more. This is one of those stories that you need to read the previous books right before you read the new one, because if not you will be lost. Half the time I had no clue who was who and what did they stand for. It is a very hard story to follow and does have a dark tone to it. Personally I don’t really care for it, but the story itself is pretty amazing. The sex is not the main focus of the story, but the war that is happening is.

For me this story is just too hard to focus on and is something more for a afternoon read. I like my stories to be a little bit more fun and sexy, which this definitely is not. I am glad to see that it might be reaching the end though. We will see what the next book brings.