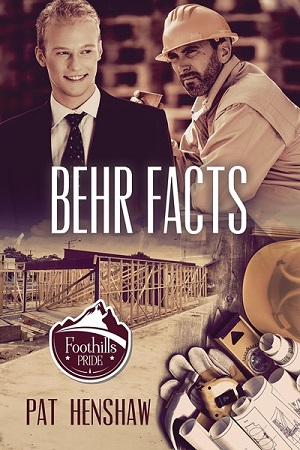 Blurb: Big, burly CEO Abe Behr is dismayed to discover someone—possibly a family member—is stealing from Behr Construction, which primarily employs Behr relatives. Abe takes the unprecedented step of hiring an outsider, likeable CPA Jeff Mason, to go over the books and help find the culprit. They are drawn to each other as they talk to workers, including Abe’s two younger brothers and their shifty cousin.

Since he has sacrificed romance all his life to build the business, Abe’s surprised by his feelings for the handsome Jeff. He’s even more shocked when they are confronted by bigotry in the Sierra Nevada foothills community, which is being inundated by gays moving from the San Francisco area. As he and Jeff get closer, Abe must come to grips with coming out to a family and community that aren’t very tolerant. Fortunately, being the head Behr helps him find his footing and grab onto love when it bites him.

Review: This is the third instalment and Pat Henshaw’s Foothills Pride series and I am still in love with it as much as I was when I first had the pleasure to read and review the first book. All books in this series can be read as a standalone, but I recommend that you read it in order. There is a lot of overlap with characters popping up and even in a supporting role, these characters are such a key to the life of the town that I doubt that anyone could help but go back and read the stories of at least four other members of the community. But that’s just me, I suppose, since I’ve already stated just how much I love this series.

I am aware that fans of the paranormal/shifter genre may get tricked – Foothills Pride sounds like a shifter pack rather than it being the LGBTQ community of the Sierra Foothills being who they are/not hiding who they are. Being a fan of shifter books as well, this thought has crossed my mind a time or two since the first book.

Behr Facts is a wonderful addition to the series. The pun intended in the title is a big clue for anyone who likes their men in the form of big, burly men (bears). Behr may be the last name of MC, Abe Behr, but he is also the bear of the title. He is the CEO of the family construction company, which hires a great deal of the Behr family living in the local area. Since the death of his parents he has been trying to look after his younger brothers and then run the company with a single-minded determination which has meant that dating has been something he has pushed to bottom of his list. Things change when he meets freelance accountant Jeff Mason. In fact his presence not only saves his business and helps Abe find the bad apples in his company, but he also makes Abe want to be a man that Jeff is proud to be with (which includes having to come out).

Abe and Jeff are a very sweet couple. They’re both the type of personality that is quiet on the outside, hiding the depths are on the inside. They have a very quiet strength between them and the result of this is some understated but crackling sexual tension between them. The story is simple but it continues with the bigotry of the community with the increasing homosexual population (I think that’s how you say it). Abe is frustrated with the bigots and is keen to get rid of as many as possible, as well as trying to find out who is stealing from the family company. There is also a bit of set up for the future with Abe’s younger brothers, Ben and Connor.

Abe is a hard working guy who has always put others’ needs before his own, I’m glad he got his HEA with someone that complements him perfectly!

As a quick PS, if you go to be Pat Henshaw’s blog (http://patbooked.blogspot.com.au/2015/09/preliminary-stone-acres-ca-map.html) there is a map of the fictional Old Town in Stone Acres, California – where the series is set.