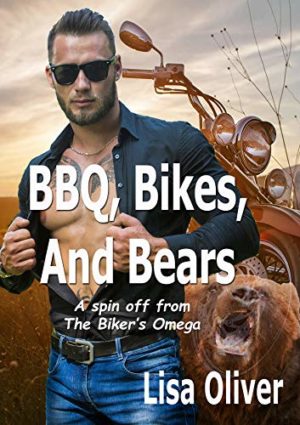 Blurb: It’s been almost twenty years to the day that Clive lost the love of a shifter who’d found his true mate. Now, he plans to celebrate the 4th of July with beer, barbecue, and maybe some hot company. As president of the Epitaphs MC, he’s never short of company, but when his musing about his previous love takes a melancholy turn, he decides a bike ride is the cure for the depressing cobwebs in his brain.

Roy Carmichael is one of the new police officers in Orlando, and as such, has been stuck on traffic duty on a public holiday. With only a few minutes left to go on his shift, he’s dreaming about grilled meat and maybe a swim to cool off after being stuck in a car on a hot day. His dreams are interrupted when a bike roars past him, going far faster than the speed limits allow. Roy loves a good chase and figures it’s the perfect end to a slow shift.

One sniff and Roy’s bear knows he’s found his forever, but between Roy’s job and Clive’s, mated life isn’t going to be easy. The Black Skulls MC is sniffing around and wants a merger with the Epitaphs, and one of the Epitaph members isn’t happy that Roy’s bounced into Clive’s life. Fireworks are guaranteed.

Review: This story is connected to the Alpha and Omega series so I would suggest reading those books first since Clive is mentioned in them.

Clive has never had problems with finding someone to hook up with but his heart was not in it. Close to twenty years ago Clive’s lover had met his true mate and took off. Clive was a human but he knew about true heart ache and he never wanted to feel it again. However celebrating the holiday and drinking beer has him thinking of the past and heading out for a ride. To bad he was speeding and a cop caught him.

Roy is a big ass bear shifter who has found his mate. There are a few little issues though one with Clive being the president of a biker club and him being a cop. To top it off there are some problems with another biker club and damn Roy has to figure out what to do. Things are going to get real interesting.

I love bear shifters and their sweet taste. Nice paced story with some hot characters, laughs and a bit of danger are just a bit of what your going to get in this story. I hadn’t remembered Clive from the previous books but do remember his attitude and was glad to see he got his head out of his ass. This is a sweet story that had me wishing for more. I got a blast out of reading about Trent and Marly again.

I had fun reading this and can not wait to get my hands on the next book. I loved the characters and their story, and can guarantee that you will too.