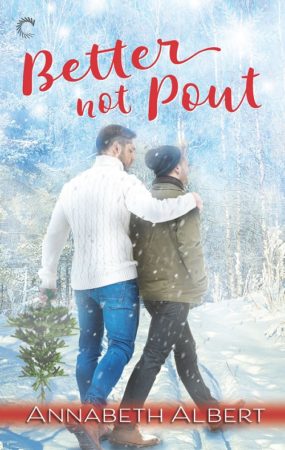 Is it a recipe for disaster? Or a once-in-a-lifetime opportunity for holiday romance?

Teddy MacNally loves Christmas and everything that goes along with it. When he plays an elf for his charity’s events, he never expects to be paired with a Scrooge masquerading as Santa Claus. His new mission: make the holiday-hating soldier believe he was born to say ho-ho-ho.

Sergeant Major Nicholas Nowicki doesn’t do Santa, but he’s army to his blood. When his CO asks an unusual favor, Nick of course obliges. The elf to his Kris Kringle? Tempting. Too tempting—Nick’s only in town for another month, and Teddy’s too young, too cheerful and too nice for a one-night stand.

The slow, sexy make-out sessions while Teddy and Nick are alone and snowbound, though, feel like anything but a quick hookup. As a stress-free holiday fling turns into Christmas all year round, Teddy can’t imagine his life without Nick. And Nick’s days on the base may be coming to a close, but he doesn’t plan on leaving anything, or anyone, behind.

Review: Nick was all for doing his job, but did his job have to have him dressed up as Santa for a whole month? His commander’s husband who usually played the part had had a heart attack and was not able to do it. So it was his job to find someone who could, however he was the only one available. It wasn’t like he hated the holiday but his home life growing up didn’t give into the cheer of a holiday with no family. His sister was married with kids but had been one of those teenage girls who ran wild, his mother was a drunk, his dad ran off and then died. Leaving him alone for most of his life. He joined the military after graduation and was now going to retire in one month. A month left and then it was Florida all the way. To bad it wasn’t for him. Then he comes across a cute elf that just might have his mind changed and his heart.

Teddy was all for giving. When he was a child his older brother had passed away in an accident and he just felt that he couldn’t leave home. It was his safety net, and lets face it he loved it. Then he is working with a very grumpy Santa who made his mouth water. One month that was all he had, plans need to be figured out.

It definitely gave you that Christmas feeling and the setting rocked. I loved the characters and the family surrounding them. I will admit that I didn’t care for Nick at all, well until the final end. I did love the grumpy Santa scenes and the highly suggestive and bossy elf who had a big heart. Now for the downside, yes the guys had chemistry but the passion and heat were missing somewhat. They just didn’t connect like they should have and quite frankly I think it was Nick. The story was cute and gave you a sense of cheer, but it also was a bit dull to me. It was just missing something and I couldn’t really see what I wanted to see.

Overall it is a really cute story that was entertaining. I enjoyed most of it but for me I need more zest. However it is a good book and I would recommend it.