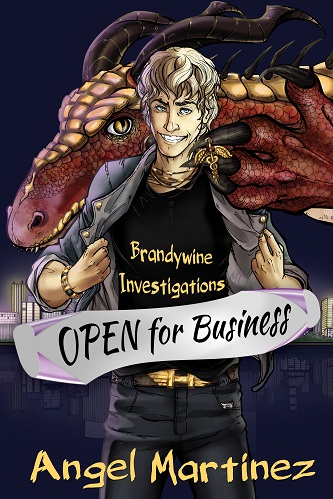 Blurb: When humans forsake the temples, the gods need to find other employment. Hades opens Brandywine Investigations after his divorce and his subsequent move to the modern world. If he was hoping for boring infidelity cases and lost dogs, he’s sorely mistaken as murder and mayhem find his agency and his extended family at an astonishing rate.

Please note: The stories in this omnibus have been reedited, and expanded by about 18K (total). The majority of the expansions were in No Enemy But Time.

Hades is given devastating news and so looks for something else in his life. He decides to open a P.I business called Brandywine Investigations. A few murders has him thinking they are connected and so starts looking for clues. He runs across Tiberius, Ti, right after one murder. Ti is a homeless man just looking for a place to sleep but his world is turned upside down when introduced to Hades’ world. I liked the story but at times felt Hades’ character was off somehow. Ti for his part was an alcoholic battling life and all that entails. The two work together to figure out the case.

No Enemy But Time

This is a story with Zack, God of the hunt and Hades son, and Michael. There are Fallen Angels going mad in the city and the consequences are deadly. It is up to Brandywine Investigations along with Zack’s help to find out what is going on. The problem is Michael begins to show the same signs as the other fallen angels did. Zack is in for a fight to save the man he loves. While I did not connect with the MC’s I did enjoy the story.

This story is about Hermes and a dragon who steals his jewellery. But it’s way more complicated than that as it turns out it was not his doing. Chocked full of suspense and chaos this story packs a punch when it is revealed as to what is really going on.

I really liked these stories. They are all connected so it is best to read them in order. I liked the couples as well as the side characters. The mix of Greek mythology was a definite bonus for me. I especially liked the end when all the books are tied in together.