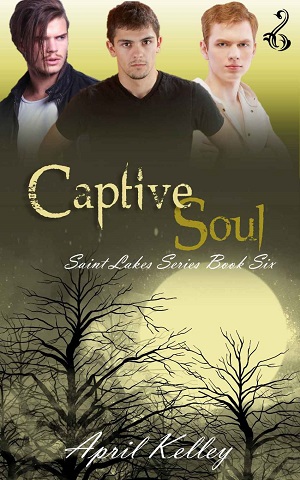 Blurb: Jules might be one of the only humans amongst a house full of paranormal being, but they’re his family, and he’s not giving them up for two mates who left him at the hands of a monster.

Jules Somerset has fought hard the past year to get his life on track after being kidnapped by an insane vampire. Since his rescue, he’s gained a family who loves him, has a job he’s good at, and has made friends with a lot of his fellow clansmen. He also holds a longing in his heart for two prejudiced jerks. Okay, to be fair, Hacen is the only one prejudiced. Tommy just goes along. Jules wants to be so over the whole mating thing already but can’t seem to stop wanting them both.

Review: Each book in the Saint Lakes collection features a new romantic couple. To enjoy the overall story arc and crossover characters, I would recommend reading the series in sequential order.

Jules was mated to one evil vampire whose wife had made it impossible for them to mate. Thanks to a warlock, the bond was destroyed. To bad he was not bonded to the warlock and the warlock’s mate. A mate that didn’t want him, and to top it off they left him behind when they ran. Now time has gone past and he had been rescued only to be forced to live near them. Talk about a storm about to rise up.

Tommy knew that fate had a way of righting the wrongs. To bad his stubborn mate Hacen didn’t think so well. Tommy was the warlock that broke the bond and somehow turned Jules into their mate. Hacen was a prejudice asshat who is the most stubborn. Time is coming for them too, well if you want to know more read the book.

This story caught my attention from the moment I started reading and kept it all the way to the end. I must admit that this was not my favorite of the stories, but it was still interesting to read. What is better than two sexy men, three with attitudes. The characters are quite feisty and sexy as hell. I will also admit that I didn’t much care for the beginning of the story, it just felt like it left a part of the story out. However it didn’t really take away from the story to much.

I had a lot of fun reading it and can’t wait to get my hands on the next book.