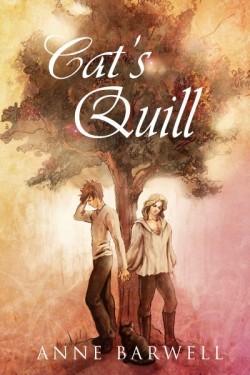 Blurb:Tomas Kemp has two successful novels to his name and the true belief that a successful sequel is only a matter of a little inspiration. When Tomas meets a mysterious stranger under the branches of an old oak tree, he feels compelled to tell him about a book he holds dear and the sequel he wants to read. But Cathal doesn’t share that deep belief that the sequel Tomas seeks ends happily. Cathal has seen enough of a world where stories are real to know that happy ever after is sometimes the dream that won’t come true.

But stories have never let Tomas down, and as he follows Cathal across the reality shift between their worlds, he learns that Cathal is right: Happy ever after is never just given—but sometimes, it can be fought for and won.

Review: Tomas is a writer with writer’s block. He decides a change of scenery is in order to hopefully find his spark again. But that’s not all he is hoping for. I liked Tomas’ moodiness. You never knew how he was going to be from time to time.

Cathal, I loved, was a mysterious character. The more I got to know him the more intrigued I became. Though the story starts out slow it begins to pick up after all is set in place. We get to see how the characters interact and communicate with one another.

The scenery is breathtaking as well tranquil at times. I felt as though I was there with them. A truly lovely story that had me from the start.

One thought on “Cat’s Quill by Anne Barwell”