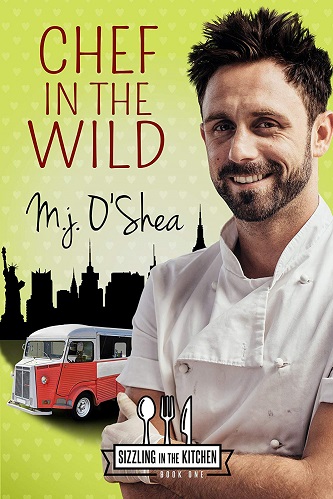 Title: Chef in The Wild

Series: Sizzling in the Kitchen 01

Blurb: Chef Baldwin Powell has everything he could ever want … until he doesn’t. Fancy parties, celebrities, magazine write-ups, his own little empire of stainless steel and fire – he thought all of it was forever. It only takes one awful meeting for everything he’s worked for to be yanked out from underneath him. And one fateful meeting with the owner of food truck, of all things, to realize maybe what he thought he wanted isn’t what he needs after all.

Murphy Haynes chose a different route. He decided right away that high-pressure kitchens weren’t for him so he took his skills on the road. If he happens to stop in a certain well known chef’s neighborhood more often than anywhere else on his route, sue him. He’s his own boss for a reason and there’s something about Baldwin Powell that he can’t resist.

They’re opposites in nearly every way – On paper it should be a disaster. But life and love in the wilds of Manhattan rarely work out the way anyone expects.

Review: Chef in the Wild is the first book in MJ O’Shea’s self-published series, Sizzling in the Kitchen. This is the first in a four book series. Unfortunately, at the time I read this series I read another series (Recipe for Love by Ari McKay), and so I mixed things up and only just realised that I did a review for one series and not this one. Which sucks, because this won’t have as much detail as I usually try to put in reviews since it’s been almost two months since I read these books.

So quick rundown on the story:

Baldwin Powell is one of the most well known chefs in New York City. He’s at the top of his game and a chef at a 5 Michelin star restaurant. And then when he thought that his boss had called him in to offer him the next big opportunity in his career it all comes crashing down, and Baldwin loses his position to his archnemesis in the business. I will admit the boss’s move seemed a little silly but who am I to argue when it sets the scene and move the story forward?

After moping for weeks, Baldwin finally leaves his apartment and ends up at a food truck which makes all manner of gourmet wraps. All them made and sold by Murphy, who also has a massive passion for food and while he has the cooking skills to run his own kitchen, but at the moment all his passions are in the long hours required for him to run his hugely successful food truck. He’s certainly popular on the scene of New York foodies, which more than anything makes me want to make the marathon flight to visit!

There is a definite spark between the two men from the get go, and their friendship blossoms quite quickly as Baldwin finds both Murphy and his food truck fascinating. However, life leads Baldwin out of Manhattan and to his family, in the small town where he grew up. Baldwin’s recent career bombs along with getting to know Murphy has him thinking about his future and getting back to what he truly dreamed to do. The only problem is he’s not sure how Murphy fits into it at all.

I think the only thing that sort of disappointed me was relying so heavily on the whole miscommunication trope to help these guys through to the end. Otherwise they are fascinating and its so easy to see that they are written for each other.

This is a slow burn and exceedingly sweet romance. Baldwin and Murphy have excellent chemistry and it really comes up when it comes to their mutual love for food, which is what keeps them together long enough to get to know each other. In fact, for me it was the passion for food that made the book so real and relatable, in between all the romance and brooding on Baldwin’s behalf. I recommend this for anyone who loves a bit of romance in the kitchen and a bit of romance in New York.