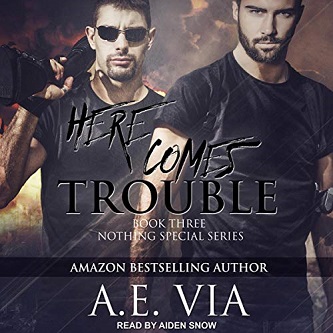 Blurb: Detectives Mark Ruxsberg and Chris Green are very good at their jobs. Being the enforcers for God and Day’s notorious Atlanta PD Narcotics Task Force causes the crazy duo to get into more trouble than they can often get out of. The pair never misses out on an opportunity to drive their lieutenants crazy with their dangerous, reckless, and costly stunts, landing them in the hot seat in front of God…often.

Ruxs and Green love their jobs and they don’t mind the very demanding schedule that leaves them little time for socializing or dating. It’s fine with them, they enjoy hanging out with each other anyway.

However, most of the men in their close circle of friends and colleagues are pairing off and set-tling down. God has Day, Ro has Johnson, and their Sergeant Syn has Furious.

For the past several years, Ruxs has only sought out the advice and company of one person, his partner and best friend Green, and vice versa. Both of these alpha males are presumed straight, but neither can deny the heat that’s building in their once-“just friends” relationship.

Review: Here Comes Trouble is the third instalment of AE Via’s Nothing Special series, which is based around the action and romance of Atlanta PD’s elite narcotic team, lead by partners, both in personally and professionally, God and Day. This series can be read out of order, however, I would say that that there could be some confusion when it comes to the two couples from book 1 and 2, as well as a third couple which had formed in book 1 and featured somewhat heavily though it. Being that these characters are a team and how Via has written it, these guys lives intertwine significantly.

I’ve absolutely loved this series so far and I’ve loved Aiden Snow’s narration throughout of the series so far as well. His voice has the right tone and timbre that just goes so well, pulling off the rush of emotion combined with the danger of the job that these men do.

I looked forward to book 3, which is the story of two of the detectives, who do a lot of the leg work on the streets for the team, Mark Ruxberg and Chris Green. I think it’s because of Green’s name, but I kind had these two guys cast in my head as the two cops from the movie Boondock Saints – Greenly and Duffy. However, if you know what I’m talking about, then you will also find out that I am very wrong. Rux and Green are as strong and tough as their bosses, Lieutenants Days and Knight. These guys work hard and live hard, although lately they spend most of their free time together just hanging out eating pizza and drinking beer. Yet, despite all that even despite having openly gay bosses, Rux and Green don’t know everything about each other. When talk of dating brings tension between the two men, we begin to learn that there is even more to these guys. As it is they have complicated families, like most people, but there is a new level of emotion at play in their friendship. Add the danger from their jobs and these guys have to navigate an emotional minefield. And being tough, manly men, they aren’t super good with being honest with their feelings.

Fans of the series will not be disappointed. There is action, hot sex and so much sexual chemistry I wouldn’t have been surprised if the characters had imploded before their story started (I know, that makes little sense, bear with me). For those that like hot cops, a lot of action and deadly adventure, I think that this is the book and series for you to get into.