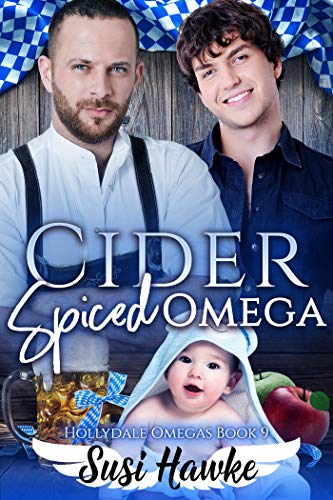 Blurb: You can’t plan when you’ll fall in love—sometimes it just kinda sneaks up on you.

Todd Foxx was only looking to unwind from the stress of running The Sausage Shack when he went out for an evening of fun at The Big O. After he ended the evening by hooking up with a hot new alpha in town, he certainly never thought he’d see him again.

Hugo Keller left his high-profile job as a certified cicerone back east and moved across country to take a brewmaster job in Hollydale’s unique beer garden and sausage restaurant. A single dad, his only plans involved giving his young son a place to put down roots and focusing on his new job—even if it was a major step down from where he began. He certainly never expected to see his smoking hot one night stand again.

Can two men—and one precocious little boy—find a way to make a family? As Hugo and Todd slowly journey from lovers to coworkers to friends and back to lovers, they’ll need to deal with an ex-wife with boundary issues, a surprise pregnancy, and mysterious “mill girls” who like to giggle in the night.

Review: Each book in The Hollydale Omega collection features a new romantic couple. To enjoy the overall story arc and crossover characters, I would recommend reading the series in sequential order.

There is a rule that should be followed, never mess around with someone you work with. That was one of Todd’s little rules, to bad he forgot it in one night. To be fair he had no clue Hugo was his newest employee, but it was a fun night. A night that left them with a little gift.

Hugo had been married once before and it left him with a cute little four year old that asked many, and I do mean many questions. One night with a sexy omega and damn his eyes if he doesn’t walk into work and see him. To his shock and surprise, it is his new boss. Things are going to get real interesting. That is if his nutty ex-wife could keep her word and the three little girls who keep showing up did not drive him crazy first. Wait till you find out who those girls are, or should I say what they are.

When I first started reading this series I had decided four books later to drop her off my reading list. There had been so much spelling and grammar wrong with them that left me not wanting to waste my time on them. Even though there is a lot of humor mixed in with just a bit of paranormal weirdness to keep me entertained. I had decided on this story to just give it one more chance and I was very surprised with it. Which now makes me want to read the four I did not read.

The puns were quite a blast to read even if the freaky ghost were a little out there. It does make a good Halloween type story though. I liked the characters and Tom is always a pleasure to have in a story. Now I am still not a fan of the paranormal aspect of a story that doesn’t actually have the men doing anything other than giving birth. They don’t shift or anything like that and it is a downside for me. Also the alpha and omega titles with human guys doesn’t really do for it either. That was actually my only issues with this story and I hate to say would continue to do so.

Other than that it was a pleasant surprise and I was glad to have taken the time to read it. I like the uniqueness to it, as I only know one other author who writes similar stories. I am sorry to say that it won’t be a type of story that will be read more than, oh a half a dozen times (laugh). I had a blast reading it and look forward to the next book.