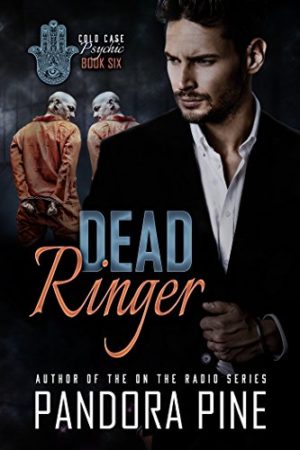 Blurb: Cold Case Detective and newlywed, Ronan O’Mara, is sitting on top of the world. When he returns to work after his honeymoon, he finds more waiting for him than a stack of dusty cold case files. Hidden in the mail on Ronan’s desk is a letter from Tank Hutchins, aka The Riverside Ripper. Convicted of murdering a woman three years ago, Tank claims he is innocent and asks Ronan and Tennyson for their help in proving who really committed the crime: his twin brother, Tim.

Psychic, Tennyson Grimm, is reluctant to meet with the convicted murderer who’s placed his faith in Ten’s gift. When Tennyson realizes Tank is innocent of the crime for which he’s serving twenty-five to life, he knows that he and Ronan have to do whatever it takes to set things right.

Together with Tank’s private investigator, the mysterious Jude Byrne, Ronan and Tennyson retrace the steps of the original investigation hoping to find the one piece of evidence that will get Tank’s conviction overturned and bring the real killer to light.

When new evidence leads them to believe there’s a larger conspiracy at play, will Tennyson and Ronan be able to find the killer before he returns to complete his diabolical plan?

Review: Ronan gets a letter from a convict, Tank, claiming his innocence in a murder conviction. Ronan is excited at the prospect of proving the mans innocence. Ten is not as thrilled until he meets the man and knows he is innocent of the crime.

I liked how Ronan and Ten went through proving Tank’s innocence however, I felt the actual mystery of the story was lacking. There was a lot about different couples interactions and a new character Judas that took up more space than was needed in this story.

Nevertheless it was an engaging story with a slew of characters that added a lot of drama to mix. Good addition to the series.