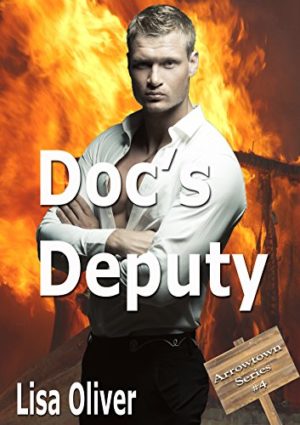 Blurb: Deputy Joe of the Arrowtown Sheriff’s department has tried to hold his head up high his entire life, even though it’s never been easy. Carrying the Quincy name has been a curse he’s worked hard to put behind him, but when his two uncles get thrown out of Arrowtown because of their nefarious dealings, Joe found the courage to turn to the one man he thought would stand by his side. Being told he was “too young, too dumb and too well-hung” were not the words he expected to hear when his true mate rejected him to his face. As the man in question was the town doctor, it’s not surprising that when Joe gets hurt, turning up at the man’s surgery was the last thing on his to-do list.

Doctor Nathan Farriday (known locally as “Doc”) has lived a long life, and not always on his own. A long time Arrowtown local, Doc has watched Joe grow into a kind, decent, hardworking man – too good for him in other words. If asked, Doc could spout a long list of reasons why taking the man as his fated mate was a bad idea. Age and inexperience were just the easiest reasons to explain. The danger from his animal half was something he preferred to keep to himself. But when Joe’s family come calling and Joe is left badly hurt, Doc has to reassess a lifetime of bad choices.

Rampaging buffalo shifters and a bomb blast have the potential to splinter the tiny shifter town apart. In the ashes of the aftermath, the sheriff’s department work furiously to keep their population safe. But will Joe and Doc’s relationship survive the revelation of Doc’s biggest secret or will they be forced to leave the town they both call home?

Review: Each book in the Arrowtown collection features a new romantic couple. To enjoy the overall story arc and crossover characters, I would recommend reading the series in sequential order.

Joe has had a difficult time and is pretty damn hard on himself. His entire family were banished from Arrowtown and their belongings were sold as restibution. He didn’t have a clue about his parents, but had been raised by his uncle. An uncle that was devious and crazy as an old loon. He didn’t feel that the twon folk really wanted him there, he knew his mate sure didn’t.

Doc knew Joe was his mate, hell he had known for two years. The problem was he was pretty cruel to him and they basically stayed away from each other. That is until his uncle came back and tried to kill him. Knocked Doc for a loop and brought his heart back into the workings. An old fool can learn something new.

They both had a lot in common, neither wanted to show their animal form. Joe was a big ass buffalo shifter where as his mate was a Komodo dragon shifter. Doc was the only doc in town and boy is he in for one big surprise. He has no clue and his reaction is funny as hell. Joe is a deputy and is pretty good at his job not to mention how smart he is. This story was fascinating and gave me everything I could want in a story. Hot sexy times, excitement, danger and so much more are just a bit of what you get in this story.

I had a lot of fun reading this and can’t wait to find out what the twin’s names are going to be. Which means I will definitely be looking out for the next book.