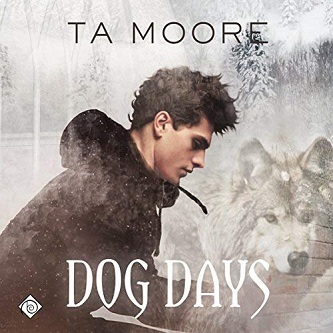 Blurb: The world ends not with a bang, but with a downpour. Tornadoes spin through the heart of London, New York cooks in a heat wave that melts tarmac, and Russia freezes under an ever-thickening layer of permafrost. People rally at first—organizing aid drops and evacuating populations—but the weather is only getting worse.

In Durham, mild-mannered academic Danny Fennick has battened down to sit out the storm. He grew up in the Scottish Highlands, so he’s seen harsh winters before. Besides, he has an advantage. He’s a werewolf. Or, to be precise, a weredog. Less impressive, but still useful.

Except the other werewolves don’t believe this is any ordinary winter, and they’re coming down over the Wall to mark their new territory. Including Danny’s ex, Jack—the Crown Prince Pup of the Numitor’s pack—and the prince’s brother, who wants to kill him.
A wolf winter isn’t white. It’s red as blood.

Review: Dog Days is a paranormal, shape shifter book set in a dystopian post-apocalyptic future by TA Moore. Sounds like a mouthful, right?

So, I feel like I’ve had my own Mandela moment (bringing the conspiracy theories, I know probably not cool). I say this because I was absolutely convinced that I’ve read TA Moore before and even had another audio. but no, I haven’t. I see no trace of book, audio or even a review I’ve written for TA Moore. Therefore, I went into this one blind and with mixed feelings. This is because I find post-apocalyptic books hit and miss and my enjoyment very much depends on my mood, especially when it isn’t a rose-tinted end of humanity trope. The very nature of the genre also means that romance usually takes a back seat to the crazy shit happening as the world goes to hell. Fair warning, this is for people that like their dystopian futures and the characters dark, unsafe and gritty where survival instincts reign if you hope to survive the day. If you’re looking for something that is primarily romance, this probably isn’t your thing.

Moore has created an intricate world. The start is kind of like The Day After Tomorrow. When storms take over the world and so many millions die, especially the humans because the conditions are hostile and no amount of technology can prepare the populations for this scale of disaster. Danny Fennick, who lives and teaches in Durham, England, is a weredog and decides to go back to the Scottish Highlands where he had grown up as he prepares to live out the storm. However, being a dog when werewolves want to take over is just as dangerous and deadly to him as the storm that killing so many.

Jack, who happens to be Danny’s ex, is the crown prince of his pack. The biggest problem is that his own brother wants him dead and he has been banished from his pack for being gay. Jack is tough and rough, he has to be to not only survive the oncoming wolf winter, but to also survive being banished in this weather. Jack needs to be prepared to do anything to survive because that is what world requires for him.

This is a complex story where the characters come to life in this dark world, they are extremely well fleshed out making it much easier for me to understand their motivations and harshness of the world that they live in. Danny is the most relatable character, he is like the connection to humanity and he is reader’s bridge to understand Jack’s raw instinctive nature.

Derrick McClain did an awesome job of narrating this story. I love his narration and Dog Days is no exception. In the other audio I have narrated by him my collection is four contemporary romances, one light hearted shape shifter romance and this one. I hadn’t known what to expect, especially from a story that is very much in an English setting, but it was amazing. I really loved how he was able to do distinct voices for characters, especially with accents. He also managed to convey the emotions so well.