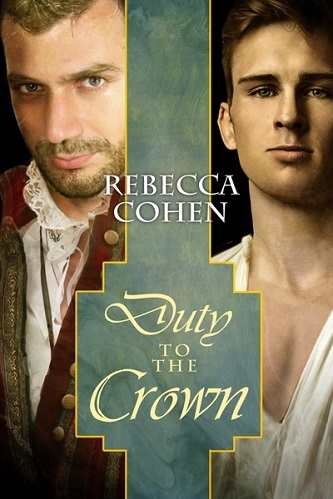 Blurb: Sebastian Hewel has never been happier. But his life playing the role of his twin sister Bronwyn, the wife of Anthony Redbourn, Earl of Crofton, is about to change. Rumors abound that Bronwyn is using witchcraft to enthrall her husband, and false evidence has been found. Practicing witchcraft is a crime that could have Bronwyn brought in for questioning by the sheriff, and that would reveal Sebastian and Anthony’s secret.

Together they must decide whether it is time to lay Bronwyn to rest. Anthony intends to ensure that whoever implicated Bronwyn pays for the treacherous deed. Whatever happens, Sebastian and Anthony must prepare to face an unknown future together.

Review: This book is part of a series and must be read in order.

Sebastian is still enjoying his role as Lady Bronwyn, the wife of Earl Anthony Crofton, but things start to become sticky when Anthony is asked by Queen Elizabeth to do his duty to the crown and seduce the whereabouts of a French noble from Marie, the nobles’ daughter. Anthony’s duty becomes difficult when Marie meets Sebastian and becomes charmed by him and then her brother, Nicholas, arrives only to fall under Bronwyn’s charm. Now, Sebastian has to charm the whereabouts from the siblings and Anthony has a taste of his own medicine. It is complicated further when Sebastian’s uncle insists that the farce ends. Just how are Sebastian and Anthony to cope with the pressure of pleasing a Queen, an interfering uncle, a suitor who becomes obsessed and bandits?

Ah an excellent second book of Elizabethan forbidden love with a dose of political intrigue. Sebastian is appalled when Anthony confides the Queen’s request (more like royal decree), that instructs Anthony to do whatever he has to in order to seduce the whereabouts of a French noble from the man’s daughter. Sebastian struggles with his jealousy and begins to doubt Anthony’s love for him, as Anthony seems to be enjoying the seduction just a bit too much. But, the tables become turned and not only does Sebastian become the focus of Marie’s attention, he also, in the guise of Bronwyn, becomes the focus of Nicholas, Marie’s brother. Anthony and Sebastian both struggle with the task that has been laid on their heads.  But, they soon discover that whittling out hidden nobles is not where the danger lies.

I really enjoyed this second story of The Crofton Chronicles. Picking up just over a year after the first book we see Anthony and Sebastian are still madly in love and devoted to each other. I will have to say that in this book I could see how much they care for each other and the connection between them was much stronger and more tangible.  The relationship between them is something to be envied and it is, by other women in the Elizabethan Court.

The storyline is really good.  I enjoyed delving into the political intrigue of the Elizabethan Court and seeing the effects on those who are involved and I really liked the twist near the end, it was an added bonus. I must admit I am intrigued as to what will happen to Anthony and Sebastian, and I am really hoping that there will be more to their story in the future.

I will recommend this to those who love historicals, forbidden love, hot sex, jealousy, duels, political intrigue, bandits and a very happy ending.