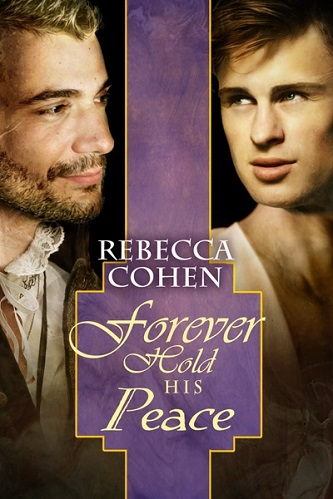 Blurb: Despite the uncomfortable clothing and the gossip at court, Sebastian Hewel is still enjoying the role of Lady Crofton, wife of Earl Anthony Crofton. But when Queen Elizabeth asks a favor of Anthony, Sebastian’s world fractures and his heart threatens to break. The Queen wants Anthony to seduce Lady Marie Valois, the beautiful daughter of a French noble, to discover the whereabouts of her father, who is wanted by the King of France.

Sebastian knows Anthony can’t refuse the Queen, especially since he has something of a reputation at court. But the situation is further complicated when Marie meets Sebastian without his disguise—and starts flirting with him. Her brother, Lord Nicholas, arrives at Crofton Hall, not happy that his sister has been linked to a man like Anthony, only to find his own head turned by Lady Crofton and her acerbic wit. Contending with the attentions of both siblings—and a very jealous Anthony—would be bad enough. But then Sebastian’s uncle demands Sebastian and Anthony stage Bronwyn’s death to avoid discovery….

The conclusion to Anthony and Sebastian’s story in The Crofton Chronicles sees us saying farewell to Bronwyn’s role in Anthony’s life, but the person who brought about Bronwyn’s early demise will have to pay for their treachery. Sebastian has played the role of Bronwyn for two years after being manipulated into replacing his sister for her wedding, Sebastian easily flits between being himself and Bronwyn (although he still hates the restrictive dresses) and neither Anthony and Sebastian is ready to lay her to rest but when their hand is forced their revenge uncovers a dastardly secret and any guilt that lingered for Sebastian is wiped away. But, with no role longer to play Sebastian wonders what to do next and Anthony has the perfect solution.

I really enjoyed this addition to Anthony and Sebastian’s story as we see treacherous plans come to fruition and Anthony’s retaliation, we see Sebastian having to make decisions for his future and we see Sebastian’s and Anthony’s love staying true and strong. This is a beautifully written story where action must be taken quickly and surprising twists are unearthed, we are treated to the theaters of London as Sebastian returns to his first love and the Elizabethan court as Anthony exacts his revenge. The story falls into line perfectly and we encounter Sebastian and Anthony at their most amorous, of course it doesn’t run exactly smoothly as an old flame of Anthony’s tries to stir the pot.

I have to say that I have been impressed with the detail that has been given to this series, where fact and fiction have been blended quite well to give us a good look at Elizabethan England and the risks that many faced. Anthony and Sebastian are two of my favorite fictional historical characters and I was so happy to read the epilogue and discover that they enjoyed many years together.

I recommend this to those who adore historicals, men who chance everything for love, revenge at its sweetest, a wonderful plot, a passionate couple and a great ending.