Hold on tight, you’re in for a ride and an all-nighter! 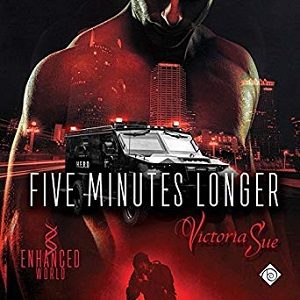 Blurb: Talon Valdez knew when he transformed into an enhanced human, his life and his dreams were finished. Reviled, mistrusted, and often locked away, the enhanced were viewed as monsters, despised by the public, and never trusted to serve in the military or any law enforcement agency.

Years later he gets a chance to set up a task force of enhanced to serve in the FBI, but with one proviso: each enhanced must partner with a regular human.

Finn Mayer dreamed of joining the FBI from the time he was fourteen and made every possible sacrifice to make it happen, including living with his selfish mother and bullying, homophobic brother and never having a boyfriend. But his undiagnosed dyslexia stopped his aspirations dead in their tracks. His last chance is to partner with Talon, an enhanced with deadly abilities who doesn’t trust regular humans with their secrets and wants Finn to fail.

Review: I really wanted to hate Talon. The team got on my nerves and I felt the anxiety Finn carried on his shoulders as he charged bravely into the unknown world of this new enforcement agency, mixing the worlds of the enhanced and regular humans like himself. These tensions are exactly what Victoria Sue wants to build up in us while we read and listen to her beautifully spun story. When those tensions do finally burst, flames erupt, physically and metaphorically. Action packed, all emotions, and sizzling hot sexual encounters build this loose knit team of talented if frustrating hooligans into a functional team of heroes with strong bonds.

Nick Russo’s narration is great. I really like the voice he has for Talon..mmmmmm, so fine! Narration is smooth, varied, and has great emotional attributes throughout.

If you enjoy the X-Men/Thirds kind of world building you’ll love Five Minutes Longer and the entire Enhanced World series by Victoria Sue! Hold on tight, you’re in for a ride and an all-nighter!