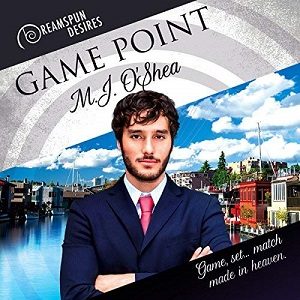 Blurb: Game, set… match made in heaven.
Spoiled socialite Quinn Valenzuela has no interest in sports or his family’s huge sporting goods empire, Sparta Athletics. So when Quinn learns his grandfather has died and he’s in control of the corporation, no one is more surprised than Quinn himself.

Dedicated COO Porter Davis has little time and less patience for brats like Quinn who have never done a day’s work, but circumstances leave him with little choice. Quinn claims he’s ready to leave partying behind and grow up, but it’ll take more than words to earn Porter’s respect. As it turns out, they can work – and play – together after all. A friends-with-benefits arrangement makes sense for the two busy men, but are they too different for it to ever develop into more? Not if Quinn can convince Porter he has his head in the game.

Review: I have fast become a fan of MJ O’Shea, mostly acquainted with the author’s works through Dreamspun Desires. While Game Point is not my favorite story by the author, it was no less an enjoyable read. The story itself is a great mis of sweet and sexy, which is something that O’Shea does well in my opinion. For me what elevated the actual content of the story was the narration by Kenneth Obi, this is the third audio I’ve heard his narration on and it was a very pleasant experience. The premise is an enemies to lovers story. Or more accurately, enemies to friends with benefits to true love and a HEA.

The enemies in question are Porter Davis, an ex-tennis player turned business, and Quinn Valenzuela, a relatively carefree playboy that has a lot of growing up to do. The story opens with the death of Porter’s friend, mentor and boss, who just happens to be Quinn’s grandfather and the father of Porter’s best friend (Quinn’s mum). Porter is the COO for Valenzuela’s Sparta Athletics and cares deeply for the family that run it, expect for his mentor’s grandson who flits around Europe carefree. Porter is shocked and more than a little miffed that Quinn is given a controlling interest in the company on the proviso that he is involved in the day to day running of Sparta. Meaning that Quinn is going to be in his face all day long.

When Quinn got the call about his grandfather’s death and seeming like the spoiled brat Porter thinks he is, Quinn is picked up from Spain with the family’s private plane and returned home to his see his mother and attend the funeral. He doesn’t expect the conditions in his grandfather’s will and at first is ready to hand over his controlling share of the company to his mother. However, the death of his grandfather leads Quinn towards an epiphany to get back on the right track and finally grow up into the man he is meant to be.

Porter and Quinn are true enemies at first, but when they force each other to face some harsh truths, their relationship takes a turn towards the hot. All that energy they spent hating each other has now become some tense sexual chemistry that I wanted them to hurry up and initiate. And, probably of most immediate importance, they can also actually find a way to work together professionally before they even make it to a bed.

To be perfectly honest, it took me a few chapters to warm up to Porter. He wasn’t the nicest character at first and in my opinion was a bigger brat than Quinn. Thankfully both characters undergo some major development and mature in a lot of ways throughout the story. It’s a very light and carefree read which is low on unnecessary drama.