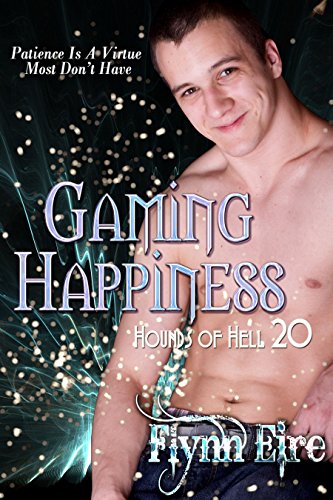 Blurb: Trojan Reed likes his life. He’s a popular YouTuber, safe at the school, and doesn’t have to interact with the hellhounds—who terrify him. He gets food delivered so people aren’t staring at his scars when he leaves. It wasn’t what he expected after escaping years of abuse on his own only to be “rescued,” but he’s content.

Jackson Magnus regularly complains he’s the only one not having sex, but it was never about the physical urges rather the desire to finally find his mate. He’s longed and prayed for one since he was young, and it constantly feels like everyone is finding their other half except him. But then his one escape from reality—watching his favorite gamer—turns into the ride of his life.

After a bit of chasing his tail, he finds where his mate is and goes just to visit him, a quick peek. Everything goes too far too fast, and two people see the same events in different ways. What will it take to bring their game of love to happiness?

Review: Each book in the Hounds of Hell collection features a new romantic couple. To enjoy the overall story arc and crossover characters, I would recommend reading the series in sequential order.

Trojan has gone through hell and back. He is one of the save souls brought to the school. He is one hell of a gamer and is popular through YouTuber, but he won’t leave his room. He has scars from a time when he was in highschool that left him afraid of those bigger then he is. He just doesn’t want anyone to stare at his scars, and he has them on the outside as well as inside. Then he finds out he is mated to a hellhound, not what he was expecting nor wanting.

Jackson is calmer then most hellhounds but he is still a hellhound. When he finds out that one of his swimmers was his mate, it leads him to seek him out. A gammer that he had a crush on. The problem is he was just a bit to frisky for the scared man. He is going to need a lesson on slowing down.

There is something about the way that Flynn tells a story that will not only draw you in and keep your attention the whole time, but it will more than likely have you laughing your ass off at parts of it. The characters are beautifully written with big hearts, however if you cross them, they have no problem putting you down. They will protect their love ones with their entire lives.

I love the paranormal tone and the little bit of twists that come with it. I had never really thought about a story that not only has angels in it but hellhounds also. When one thinks hellhound, they think evil and death. Now granted they were originally from hell and they can kill who they think need to die, these guys are different. Now even though there is a bit of angst with each character, which at times can drive a reader nuts, there is very little danger. My only issue with these stories is they seem to follow the same path in writing. There is nothing that sets them back to being unique in the story.

Other than that I had a blast reading this story. It caught my attention from the moment I started reading and kept it all the way to the end. It also gave me everything I could want in a book.