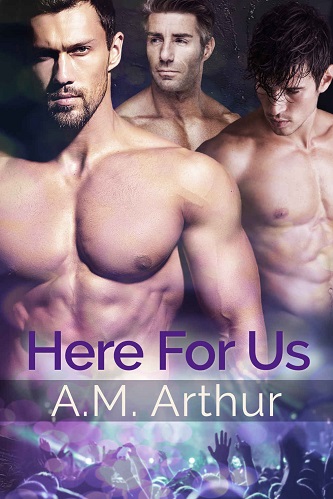 Title: Here For Us

Blurb: Cris Sable doesn’t walk into popular gay bar Big Dick’s expecting to find more than a casual hookup, so he’s surprised by his instant attraction and intense chemistry with go-go dancer Jake. Jake’s sexy as hell and a firecracker in bed. The sparks between them are undeniable, and what starts as a hookup evolves into something deeper, possibly permanent—until Jake dumps Cris flat on his ass for no good reason.

Angry and confused, Cris finds comfort with his longtime friend and employer Charles “Chet” Greenwood. Cris’s emotional state stirs up Charles’s long-buried feelings for Cris. Feelings he’s denied for eight years, because Cris is his employee and therefore off limits—not to mention two decades younger than Charles. Cris admits he has feelings for Charles, too, but he’s still getting over Jake and both men agree nothing can happen between them while Charles is still Cris’s boss.

Jake Bowden knows he doesn’t have anything to offer a guy. He’s a go-go dancer with no degree and no real career aspirations. He’s also used to everyone who loves him leaving, so it makes sense to cut Cris loose before things get too serious. Cris is kind, passionate and totally deserves a guy like Charles—wealthy, owns a home, successful businessman. Jake can’t compete so why bother? They’re better off together. But when Jake has a serious personal crisis, Cris and Charles unite to pull him back together, and the three men discover it’s possible—maybe even inevitable—to fall in love with more than one person at a time.

“Here For Us” is the first in a brand-new m/m/m menage romance series that explores the March/May/September relationship of three very different men.

Review: Three men with baggage gravitate toward one another as feelings long buried come to light. Insecurities send one man, Jake, to question himself after having been with Cris. Devastated Cris turns to his friend and boss Chet for comfort. The two admit they have feelings for one another.

This was a drama filled book with a lot of emotions happening between the characters and themselves. There were a lot of secondary characters introduced that at times overwhelmed me. But I figured they were introduced for a reason as in they were in the rest of the series.

It was a complicated yet sweet beginning to an interesting menage story.