Hi guys! We have Heloise West visiting today with her new release His Dark Reflection, we have a great excerpt and a fantastic giveaway so check out the post and enter the giveaway! <3 ~Pixie~ 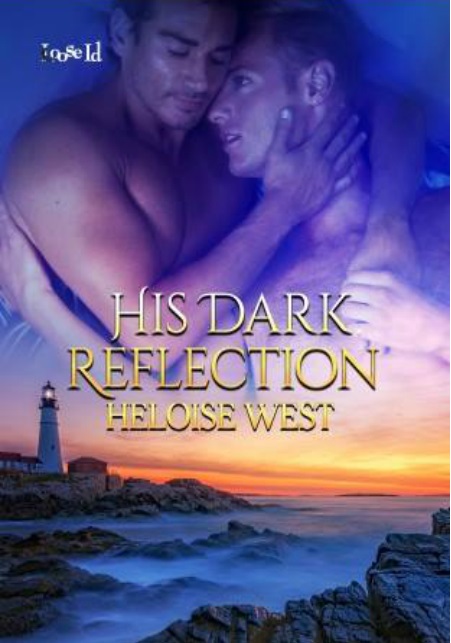 Disgraced FBI agent Nick Truman has failed to save his sister, held hostage by a drug cartel until he could give them Alex Crow, who eluded him. His epic downfall lands him in Witness Protection, where he plays by the rules and keeps to himself. But the murder of his neighbor brings danger to his door. He unexpectedly finds himself the champion of innocents and helplessly attracted to the homicide detective in charge of the case.

Homicide Detective Hank Axelrod is good at digging out secrets, maybe because he hides a big one of his own. He also suspects his husband has one foot out of the door of their marriage and the specter of single life looms unpleasantly on the horizon.

A murder resembling another brings Nick into his world, a man who claims to be a mystery writer looking for a real life resource. Hank’s instincts say he’s more than that, and he’s rarely wrong.

Torn between the errant soon-to-be-ex husband and the distracting, sexy stranger, Hank needs to focus all his attention on his murder case before he becomes the next victim. Getting everyone out of the car reminded him of clown cars at the circus. The restaurant was well known—traditional and understated. Nick was dying to try it out for himself, but that wasn’t going to happen unless he found himself a sugar daddy. Maybe more like a sugar granddaddy, since Nick wasn’t so young anymore. Estevez and Cusack held back from going inside to have another vape. Nick leaned against the car, well aware he looked good in his all-black chauffeur’s gear, and the two guys approached when he lit up a normal cigarette. Vaping—what the hell? He fell into an easy conversation with them about baseball until a woman came out and impatiently waved his new friends into the restaurant.

“This was supposed to be fun,” Cusack complained through a stream of vapor.

“It’s a fantastic restaurant. Gimme your skinny tie, John Cusack, and I’ll pretend to be you,” Nick said. “I’d put up with them for the edomae chirashizushi. Don’t be brats.”

Well, fuck it. I’m hungry. “Be good boys and bring Uncle Nick a treat, and I’ll take you someplace fun.”

“Strippers,” they said together.

He had no reason to believe they were a couple. Despite their horror at thinking he was trying to pick them up, he didn’t think it was because he was a big scary gay. Ugh, was it his age? Something metrosexual about them, if anyone still used that term, made him ask, “Tits or ass?”

“Please, sir, we’d like some ass,” Estevez said with false solemnity. “What would you like, Nick? The edomae chirashizushi, right?”

As they were walking away, Estevez said, “Dude’s cool.”

“Dude scares me,” Cusack admitted with a glance over his shoulder. Nick gave him his second-best wolf grin, just for the hell of it.

The city was small, hard to get really lost in, and he’d driven long enough now he knew his way around in the light and the dark. Nick liked driving, especially late at night when the streets were nearly empty except for cops and whoever else needed to be out during those hours. People like him, avoiding the daylight or headed for trouble.

He called the limo company’s dispatch and arranged for someone else to pick up the folks at the restaurant. Estevez and Cusack became Tim and Jeff, and they hired him for the remainder of the night to drive them around in search of fun. He was glad they’d eaten dinner, as they raided the limousine’s bar once more. The pair of them appeared to have known each other a long time; their references stretched back to college in that weird shorthand that such friends exhibited. They tried to include him in their conversation, and he left the shield window open so he could hear them, but he didn’t have much to add. He had sushi to eat while they indulged their libidos, because he wasn’t going in with them anywhere. He was still on the clock, and he wanted to keep this job.

They were pretty easy, with similar vanilla tastes. No S&M, nothing remotely kink-like, just watching pretty, long-legged twinks swing on poles. He took them to the Toolbox because he knew they’d like it. He did too, when he was in the mood for go-go boys and had the cash for the cover charge and a couple of beers. The bouncer even gave him a wave from his stool by the door. Since it was a weeknight, Nick found a parking spot directly across the street and ate his sushi while listening to a sports-talk station. When he got bored with that, he turned on the dome light and pawed through a canvas bag of books and a couple of newspapers. He fished out today’s and read through it until he came to a small piece about the FBI, and federal agencies in general, naming a couple of local heroes and their affiliations. It made him nauseous, but he couldn’t stop reading. Then he needed a drink.

After checking his watch, he punched an imaginary time clock and got out of the limo. Off came the cap and company tie, the black suit jacket left behind. Likely he looked like a server who had lost his apron, but he couldn’t sit inside his skin anymore. He wanted a drink and wanted to dance, so he locked up the limo. He had no intention of getting wasted, and he still had to get the Breakfast Club home. If someone had a beef about it, he’d deal with it later.

“Buy me a drink,” he said to Tim when he found them at one of the tables by the stage.

Smiling, he didn’t appear surprised to see Nick. “No problem. What’s your poison?” Tim waved the half-naked server over.

“Tequila shooter’s fine, just the one. I have to get you pumpkins home by midnight, right?” Then he’d find a nightclub and blow off some steam. “Hey, Jeff.”

“Sometimes.” Nick didn’t want to talk, and if they got nosy, he’d go back outside, maybe call them a cab and bring the limo back to the garage.

The intermission ended, and the next show started up.

The music blasted his eardrums, blasted away the lingering shadows. Tim leaned over to be heard. “Everyone’s talking about this guy. Most of them showed up to see him.”

Nick nodded tersely, eyes on the stage. The opening chords of Lenny Kravitz’s “Fly Away” began. Men cheered and whistled when a single slim dancer appeared in gold short-shorts, a rainbow-hued cape made of feathers, and gold body glitter. The cape flowed in perfect time to the music and movements of his body. It wasn’t really a strip—not yet anyway.

Nick glanced at Jeff and Tim, who appeared mesmerized by the act. He couldn’t blame them; he’d felt the same way the first time he’d seen Jimmy Lee dance, and the few times since. He had an animal magnetism that drew Nick’s attention away from the mess inside his own head. Jimmy Lee wasn’t his type—too fey, with a fine-boned face, tawny skin, black hair, and black eyes. Well, eye, as Jimmy Lee wore a gold patch over his left.

Based on his transcendent expression, Jimmy Lee loved to dance. Maybe he moved for someone else, tuning out the horde of losers whistling, clapping, and thrusting dollar bills at him. Having a blind side didn’t seem to bother him; he compensated for it somehow.

“Oi! There goes Kenny!” someone shouted.

A man from the audience teetered on the edge of the stage, then managed to haul himself up. He aggressively waved bills at Jimmy Lee. When Jimmy Lee backed away, Kenny lunged for him.

Without a second thought, Nick leaped to the stage and grabbed the intruder. He ducked when the man swung at him clumsily, obviously drunk.

“You’re out of control,” Nick said in his cop voice. “Take it down a notch, or out you go.”

“You got no right…” Kenny slurred, swinging at him again.

The bouncer appeared beside him, and together they gave the man the bum’s rush out the door, his friends trailing behind with his jacket and laughing at him.

When Nick returned, he tried not to grin at Tim and Jeff, the mask sliding back into place as he sat down again. Three strippers were already on stage swinging around on the poles, taking attention away from the fracas.

“You’re fast,” Tim said. “Need another drink? We can take a cab back to the hotel.”

“No, I have to get the limo back in one piece. Thanks.”

“Sir.” The bouncer dropped his hand onto Nick’s shoulder. “Jimmy wants to see you. Come on with me.”

He followed the bouncer, a brown bear of a man nicknamed Griz, down a short corridor, past an office and restrooms, to a doorway with beaded curtains. Griz knocked on the doorframe and shoved past the strands of glittering, star-shaped beads. Jimmy Lee had dressed in low-riding jeans and was just struggling into a T-shirt as they walked in. He was a little guy, but with a lot of muscle beneath the skin he was covering with the red shirt. More an appetizer than a real meal.

“Hey! I wanted to say thank you, thank you so much for coming to my rescue.” Jimmy Lee held out his hand, and Nick took his cool fingers in his own.

Nick shrugged. “Not a problem. I like your show.”

Jimmy Lee smiled. “Well, Nick St. Cloud, the owner said no cover charge for you, ever, in appreciation.”

“Oh, that’s fine, great, even.” Nick summoned a smile. “Thanks.” The brief tussle with the drunk had infused him with new energy. He needed to get out and go dancing, burn off some of the angry energy boiling under his skin.

Griz held out his hand. “You got a business card or something?”

Nick dug one out of his billfold and handed it to the bouncer. Jimmy Lee put his hand out for one too, and Nick passed it over.

“So this is for you, from me.” Jimmy Lee held out a small autographed photo of himself, bare-chested, in the same type of low-riding jeans and a provocative grin. When Nick stepped in to take it, Jimmy Lee pulled him forward and bussed his cheek.

“Okay, you’re welcome. I’ve got to go, get my guys back to their hotel. I’ll see you next time, I guess.”

Nick allowed himself the small satisfaction of being someone’s hero, anyway, for the few seconds the feeling lasted. Then he felt like a two-faced liar.

Outside the strip club, Tim and Jeff waited, leaning side by side against the driver’s door, a streetlight shining down on them. Nick unlocked the doors from the fob and waved it at them when they hesitated. “Hey, just get in.”

“No, look.” They moved apart so Nick could see the door.

“Shit!” Someone had keyed the side of the car. A jagged gash about three feet long marred the beautiful black finish. Insurance would cover it, but he bet the company would make him pay the deductible.

“Yeah, the guy you threw out, maybe?” Tim shook his head. “No good deed goes unpunished.”

“It was a great night, except for this,” Jeff added. “Thanks.” Heloise West, when not hunched over the keyboard plotting love and mayhem, dreams about moving to a villa in Tuscany. She loves history, mysteries, and romance of all flavors. She travels and gardens with her partner of 10 years, and their home overflows with books, cats, art, and red wine.