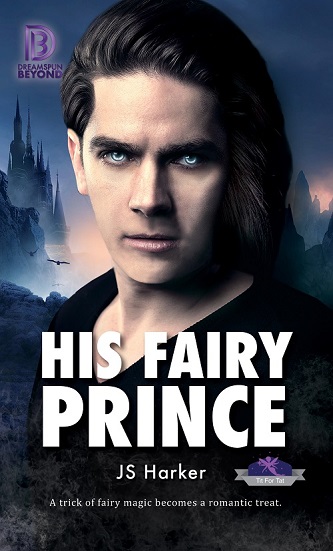 Blurb: A trick of fairy magic becomes a romantic treat.

Halloween is fantasy-loving college senior Greg’s favorite holiday, and he’s thrilled to explore a spooky puzzle—even if his friends prefer slashers over witchcraft. Luckily the gorgeous and otherworldy Alaric wants to sneak time alone with him. Unluckily Greg’s sworn off hookups. Still reeling from an intoxicating kiss, Greg opens a secret door…

Review: His Fairy Prince is the second book in JS Harker’s Tit for Tat series, which is also part of the Dreamspun Beyond house line.

I make no secret how much I enjoy both Dreamspun Desires and Dreamspun Beyond. I really like the type of romances that come out these house lines and I like the fact that they following them, I get to read different authors, and in books such as these, I get to follow ongoing series. To me it’s all a win.

JS Harker is an author that I only discovered through Dreamspun Beyond, although not overly familiar with other works, I know I’ve enjoyed what I’ve read so far. Being that this is the second book in the series, I have vague recollections of book 1, it doesn’t stick out as a book that I disliked. So really, I don’t have strong feelings either way where the book or the author are concerned.
Although this is a second book in the series, this is also a standalone book. The link between the stories is more to do with the ideas rather than any personal connections between the characters. The main gist of being a college student, during a holiday that he absolutely adores, encounters a paranormal being who turns out to be his perfect match. That’s really it in a nut shell, but it’s a fun world.

In this book we meet Greg, who loves Halloween and is a bit of a nerd who also loves a bit of live action role playing. He and his friends attend a sort of fun house type set up which has different rooms and scenarios to play along. Greg’s excited because he snagged the witchcraft room, only to be disappointed because his friends (who seem really flaky and false towards him) prefer to go to the slasher scenario room.

When Alaric, who runs the place, sees Greg on the security feed he is instantly infatuated. He’s a bit miffed at Greg’s friends and decides to make an encounter with the young man. Greg isn’t interested in a random, meaningless hook up, and Alaric must concede. However, things take a strange turn when Greg, who is out on his own, opens the portal that takes him to plane of existence where Alaric comes from. A place where Alaric also happens to be a prince.

As soon as he realised what has happened, Alaric follows Greg and the two men are on a journey to get Greg back home. Alaric also finds himself being tested by the magic of his homeland, to determine whether he worthy and ready to rule. The only question is, are these quests enough to bring the two men together for a HEA, or will Greg decide to go back home to mortal realm?

What I love the most about this journey is that it’s a bit like Alice going down the rabbit hole and a little bit like a labyrinth. Greg is learning new things about a world he had only dreamed about in his wildest dreams, while learning more about Alaric. Alaric is also on his own journey of discovery.