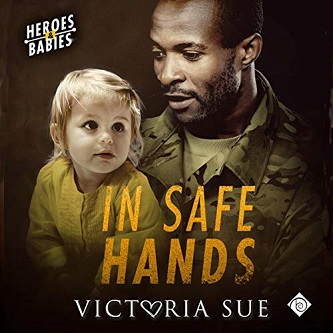 Blurb: Former helicopter pilot Maverick Delgardo’s injuries ended his Air Force career, leaving him bit-ter and one drink away from becoming an alcoholic. When his sister asks for his help on a pri-vate protection case to babysit a disgraced pop star, Mav reluctantly agrees.

Deacon Daniels, onetime lead singer and idol to his teenage fans, saw his career and reputation ruined when a reporter’s exposé led to a devastating scandal. Without money or a job, a heart-broken Deacon has lost custody of his baby niece. And just when Deacon thinks his life can’t get any worse, a stalker’s threatening messages escalate to murder.

Mav only agreed to one meeting, but his protective instincts kick in, along with an attraction to Deacon. When the body count increases, however, Mav is unsure he is up to the task of pro-tecting Deacon from a killer. But it is too late for Mav to step away, now that he’s lost his heart, and he must find the strength to reassure Deacon and his niece that they are in safe hands no matter the cost.

Review: In Safe Hands is a standalone novel by Victoria Sue, with the audio narration performed by Michael Pauley. Both the author and the narrator are people whose work I know and am aware of, although I couldn’t tell you anything from the top of my head. Honestly, I was just intrigued by the blurb. I was sucked in by a down on his luck celebrity, a cute kid and a tough former Air Force helicopter pilot turned bodyguard. If that’s the type of thing you like as a reader, then I don’t think you got anything to lose by giving this one a go.

Michael Pauley’s narration is great. I really enjoyed listening to him perform this story. I can’t really single anything in particular out, it was overall a very enjoyable listen. I do think that this is the type of book that I would enjoy less if I read because of the emotion and tone given to the reader by the narrator.

The story itself was good. I really did like it, but I think that there were times where it felt a tad bit flat. While I enjoyed the chemistry and interactions between the two MCs, I felt that there were times where I just wanted them to get their shit together. Yet, I also found the MCs really interesting, I loved their individuals flaws and challenges that they have to face, this definitely made for a more enjoyable story.

The story starts with former Air Force pilot Maverick Delgardo. He suffered injuries which ended his career in the Air Force, leaving him scarred and also suffering PTSD. From a long hospital stay and rehab he has had a difficult time adjusting to life outside of the military. He finds himself languishing in his sister’s basement, medicating himself with alcohol to deal with his PTSD. However, his sister, who is an ex-cop and now runs her own business (she has a complicated back story too), wants to bring Mav in (as they had originally planned some time ago) to act as private security. Through her connections, they have been requested to provide security for a celebrity, who has seen his fame decline and reputation ruined from circumstances beyond his control.

That celebrity is Deacon Daniels. And not only has the scandal destroyed his life, leaving him with no money, no job to make money and also in danger of losing his home and all his belongings. Perhaps the worst of it is, it has also led him to losing custody of orphaned his baby niece, who he adores with all his heart. It is absolutely heart breaking when he tries to hide the fact that losing her has hurt him more than he lets on at first.

Mav had been ready to meet the guy and turn him away. An instant attraction and his instincts for danger has him looking into the case more. However, as the guys get to know each other, the attraction gives way to genuine affection. Mav has to get his broken self together so that he can help Deacon find out who is stalking him and get custody of his niece.