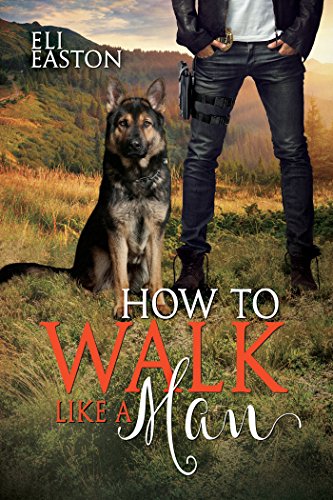 Series: Howl at the Moon 02

Blurb: Deputy Roman Charsguard survived Afghanistan where he lost his best friend—his K-9 handler James. Roman was a military dog until two years ago when he developed the ability to shift into a human. It’s not easy to learn how to be a man. He found a place to live in Mad Creek, a haven for the secret world of dog shifters. Finding a reason to live has been harder. That is, until a certain human walks into the Mad Creek Sheriff’s office and starts making trouble.

Matt Barclay has the worst luck. First he was shot in a SWAT drug raid, then he was sent as DEA investigator to Mad Creek, a little town in the California mountains. Matt’s job is to keep a lookout for illegal drug farms, but nobody in the town wants him there. And then there’s Roman, Matt’s erstwhile baby-sitter. He’s the hottest guy Matt’s ever seen, even if he is a bit peculiar. If this job doesn’t kill Matt, sexual frustration just might.

How to Walk Like a Man is the second book in Eli Easton’s Howl at the Moon series. While I hadn’t known what to expect when I started book one, I was really excited to read book 2. I strongly recommend reading this series in order, not only is it a fun, charming and sweet series, it is also totally unique. Also, there are a number of sub plots that are directly linked to book one and I think it would difficult to appreciate this book on its own.

After reading book 1, I couldn’t wait to start How to Walk Like a Man after I read the blurb. We me Roman, one of the MCs of this book, while reading Lance and Tim’s story in book 1. Roman had instantly intrigued me in the first book, he had such a gentle, firm but protective nature that I wanted to know more about the man and the dog that he was. After all, Roman is quickened, meaning that he had been born a dog but the love and emotion from his human owner meant that Roman received the spark that caused him to transform after his owner died.

Roman’s back story is one that will appeal to most readers. He was a military dog and had complete adoration for his handler, of course this affection was returned him. He was in Afghanistan with his handler, sniffing out bombs and the like. I won’t spoil and give the full back story, but it’s easy to figure out even reading the book. I loved the emotional connection I felt to this story line.

But now that he lives in Mad Creek and over the past couple years has learnt to be a man, he finds a new place in life. His military training makes him perfect to help the sheriff and has been recently made a deputy. With drugs threatening to encroach, Roman now has the job of babysitting the human DEA agent who has come to scope out Mad Creek for drugs.

In fact, the human DEA agent, Matt Barclay had also appeared in book 1, albeit very briefly. He had been shot in the cross fire and Roman had saved him then. Again, I won’t go into it because this all ties in with Roman’s backstory. But trust me, it is all very sweet. Matt knows that there is something different about Mad Creek, and he also knows that Roman is keeping him away from the town, which puts him on alert. The fact that the two men have a lot of chemistry is just another added layer for Matt.

This story is everything that is sweetness with the added strength of characters that are from law enforcement. Roman is naïve when it comes to human love and physicality, so he is learning a lot along the way. It is this naivety that adds the charm into the story, while Matt is more worldly but isn’t about to storm Roman’s defences. Once again, I loved this story. This is an excellent series I recommend to those that love a good shape shifter story.

I loved this story about Roman and Matt. Keeping a secret from Matt was hard for Ro as he was such an honest and open person but keep it he did. With the threat of possible drug being grown in their town Lance and Roman attend a meeting where they learn a DEA agent will be assigned to their town. It’s up to Roman to keep the man from learning the truth about them.

Roman’s back story is both happy and heartbreaking. He was a brave German shepherd and served his country well while in the service. He had a hard time adjusting as a human which was to be expected. Matt suspects things are going on but does not report the strange things he see’s to his superior. As the investigation continues he and Roman grow closer.

I found this story to be dramatic, humorous and intense at times. I liked the way the story flowed and progressed. Amazing addition to the series.