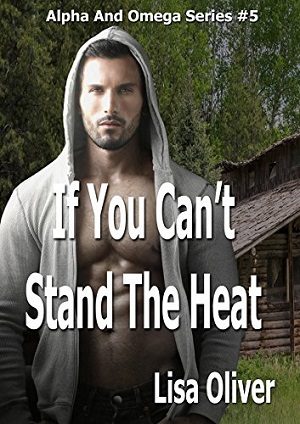 Title: If You Can’t Stand The Heat

Blurb: Stone, an alpha wolf and tracker for the council, was on an unusual but easily completed job; all he had to do was pick up a runaway omega and return him to his home pack. It sounded simple enough when he took the assignment, but when Stone catches sight of Wyatt, living in a derelict cabin in the middle of nowhere, he knows his life is about to change.

Wyatt, omega wolf, has been on the run from a forced mating for three years; living hand to mouth, doing his best to raise his four-year-old sister, Maddie. Always watching over his shoulder, scared to interact with anyone, he has no idea how much his life will change when a stranger knocks on his door during a summer storm.

But Wyatt’s past isn’t about to let him go and when the council gets involved, Stone must do his best to protect the man who stole his heart and the sweet little girl who calls him Uncle. After all, if you can’t stand the heat….

Review: Each book in the Alpha and Omega collection features a new romantic couple. To enjoy the overall story arc and crossover characters, I would recommend reading the series in sequential order.

This story was previously published in the SuMMer Heat Anthology. It has been re-edited and lightly added to version of the same story and nothing in the story line has changed.

Stone is sent to hunt down an omega who has ran away from his pack. To bad the little omega is Stone’s mate, and has a few more surprises for Stone. Things are going to get nuts, but Stone must find away to protect his mate and little sister.

Wyatt is an omega wolf whose uncle has decided that he wants him. Talk about a nasty situation but him and his little sister have been on the run for some time. Imagine his surprise when his mate is there to send him back or protect them both.

This story is not only well told but it will keep you on the edge of your seat. This little omega has a backbone of steal. It caught my attention from the start and kept it all the way to the end. Lisa Oliver is one hell of a writer and I can honestly say that this one as well as her other stories are stories that will be read more than once. I get a kick out of them and can not wait to get my hands on the next story.