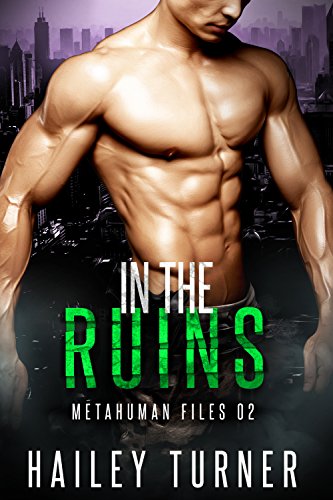 Title: In The Ruins

Captain Jamie Callahan knows the Metahuman Defense Force frowns on fraternization. For once in his life, he’s breaking all the rules. Having Staff Sergeant Kyle Brannigan on his team and in his bed is worth the risk of being found out. When a mission comes down requiring Alpha Team to go undercover in order to infiltrate a criminal alliance, Jamie knows it won’t be easy. Putting his family’s name on the line is nothing compared to the role the MDF wants him to play—that of a billionaire’s son, discharged from the military, with a lover on his arm, looking to make his own shady business deals.

Kyle knows the only way to be with Jamie is to hide their relationship from their superiors. Waking up to Jamie at home is more important than being together in public, or so Kyle thought, until he comes face to face with what he’s been missing. Pretending to be a couple on paper for the sake of the mission thrusts Kyle into a world of incredible wealth and a social status he’s not sure he belongs in, but he’ll do anything to stay by Jamie’s side.

Play the game to win.

Surrounded by the enemy, Jamie and Kyle need to trust each other now more than ever. Their covers—and the life they’re trying to build together—depend on it.

In the Ruins is a 105k word steamy gay sci-fi military romance with a HFN ending that skirts HEA. There is military violence within the story that may not be suitable for everyone, as well as explicit intimate scenes not suitable for readers under the age of 18. This is a sequel to In the Wreckage and reading the first book in the series would be helpful in enjoying this one.

Review: Jamie and his team go undercover as he and Kyle grow closer. His character is his old self as Jamie Callahan a ruthless arrogant business man. The team along with other agencies hope to thwart a terrorist attack and find out who is running things.

Things do not go as planned and people end up getting hurt. There are new metahumans introduced by the other agencies. Jamie and his father are at odds as is the norm for them. I really liked that Jamie insisted that Kyle play his lover on the mission so they could have a chance at actually being together in public.

The only thing that irritated me about the story was that I was expecting a different character to be the MC. I hope to learn more about the other male characters on the team soon.

Fantastic story with tense moments as well as action.