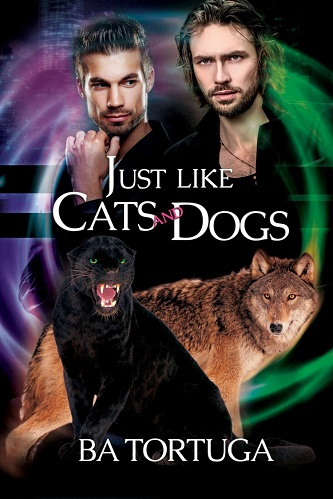 Blurb:  Can cats and dogs ever get along, let alone fall in love?

Sam knows you can never go home again. As an orphaned feline shifter raised by wolves, being an outcast is nothing new to him. But the pack is still his family, and when one of them passes away, Sam returns to the New Mexico desert to say good-bye.

Gus is a loner who rarely returns to his pack, but as fate would have it, Sam is there when he chooses to visit. The history between Gus and Sam is tumultuous, to say the least, but when Gus gets an eyeful of the grown-up and gorgeous version of his childhood bully, he can’t control his reaction. And he isn’t alone.

The attraction is powerful, but so are their differences. And with trouble brewing in the pack and danger surrounding them, Sam and Gus might not have the opportunity to seek common ground.

Review:  When I first saw this book on the list, I thought the title very quirky and fun.  However I wasn’t paying attention to what kind of book it was going to be.  So when I started reading you can imagine my surprise at some of the words they called each other and the scratching.  So I ran to the site to take a look at the blurb, and from there did the happy dance of the century.

This is a very unique shifter story that was very surprising to say the least.  Where one of the families in the pack loves to take in strays but the pack is a bit full of asshats.  Sam is a cat shifter who is one hell of a dancer and lives in the city because the pack is not really into shifters unlike them during the moon.  He had to be locked into the basement during those times, but now he doesn’t have to be.  He knows that he will never be safe coming home, but when his ma called about pop’s death he came home.

Gus is a wolf shifter and a bit of a loner.  He loves to dig in dirt for some nice gems.  He never really gave Sam the time of day other than to pick on him.  But in his heart he knew that was because he wanted Sam and he knew it would never be allowed.  Then he sees Sam for the first time in a very long time, and damn if the man isn’t hot.  Danger seems to follow Sam everywhere and he has always felt that he would never belong.  It looks to be like Gus might just be willing to help.  If you want to know more then read the book, you won’t be disappointed.

Now I have to admit that I didn’t much care for the pack dynamics or the other cat shifter’s attitudes.  It wasn’t as fun as the title made it seem to be though. Other than those minor problems, this book rocked.  I can’t wait to read the rest of this series.