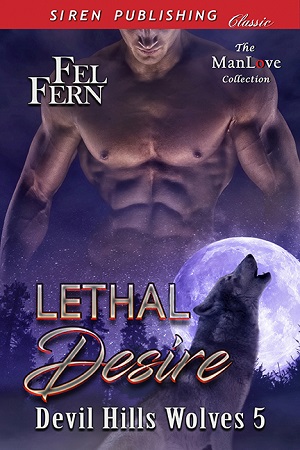 Blurb: Captured and tortured by a pro-human faction responsible for rehabilitating non-humans, Theo’s only sin is having a psychic for a brother. Theo expects to die after his brother, but the Squad has one last use for him—as a sleeper spy to kill the Alpha of the most dangerous wolf pack in the country. Theo’s nearly given up on living, until he comes face-to-face with a feral and possessive werewolf able to strip his heart bare and help him heal both inside and out.

When a naked, bleeding human is dropped on pack land borders, werewolf enforcer Joe knows Theo is trouble. Theo can’t be trusted, but Joe’s wolf recognizes its fated mate. Joe defies his pack and even his Alpha to keep Theo, but can Joe help break Theo’s brainwashing, or is he doomed to lose his mate?

Review: Each book in the Devil Hills Wolves collection features a new romantic couple. To enjoy the overall story arc and crossover characters, I would recommend reading the series in sequential order.

Theo and his brother were captured by a human group that are out to either kill or rehabilitate non-humans. They are a very cruel and evil group that should not even call themselves humans. They hunt, kill, experiment or brainwash the paranormals. He was tortured dailey and drugged most of the time. Then the squad killed his brother and from that point Theo just wanted to die. To bad the squad had other ideas.

Joe is a powerful wolf shifter who protected his world. When he came across Theo he knew the man was his mate. He also knew that his mate was in deep trouble and so was the pack. Theo was sent to kill.

This is not one of those fun loving, sweet type of romance. It has a serious tone to it with a darkness flowing through it. It is well written with sexy ass characters that will protect those they love. However they also tend to kill those who show up, but they do protect their mates. It is an action packed, danger filled type of story but there is some hot sexy times as well.

I don’t really care for the dark tones to the story and can honestly say that I don’t normally read these books more than once. It is a very good story but come off just a bit harsh to me. However I would recommend it to those who like these types of stories.