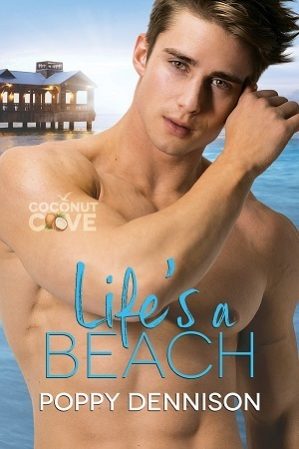 Blurb: Life’s a beach… and then you meet the guy of your dreams.

Flynn Wright’s role on the upcoming teen drama Coconut Cove means a fresh start in the land of crystal water, palm trees, and gorgeous people. The move to the beautiful beaches of Key West, Florida—and away from LA and his conniving ex—is just what Flynn needs.

Meeting sexy bartender Seth is the cherry on top of Flynn’s colorful frozen drink, and he can’t wait to take a taste. But Seth isn’t impressed by Flynn’s Hollywood good looks, nor is he interested in the complications of dating an actor, no matter how hot.

Can Flynn dodge his scheming ex and the eager paparazzi while showing Seth that he is more than a pretty package?

Review: Actor Flynn is looking for a new part after the negotiations for his current role on The Presidio seems to have stalled; he’s also looking for a way to distance himself from the fallout from breaking things off with his roommate… who is also his co-star. Coconut Cove seems like a dream come true, and Flynn throws himself into his new role. When bartender Seth catches his eye Flynn is unsure of his welcome as Seth seems less than impressed. Seth isn’t interested in being in the public eye but Flynn is hard to ignore.

This is a great start to what looks to be a very tantalising series. Flynn made a mistake of getting involved with a co-star and now that the ‘relationship’ has ended his co-star seems to have pulled strings and Flynn now has to look for a new part. Coconut Cove comes at the perfect time and it will also get him out of L.A. and into Key West so he can have a break from the tension. Seth is the bartender who catches Flynn’s eye but Seth has his own past and wants no part of the limelight but when Flynn needs him most Seth has to choose between trying to protect Flynn or allowing Flynn’s ex to manipulate Flynn.

I really enjoyed this story and loved how parts of Coconut Cove came alive at the beginning of some chapters. Both Flynn and Seth are great characters with Flynn being very down to earth and Seth wary of fame, together they are hot and they are also pretty easy going when they are together but there is tension between them as Seth has to decide what he wants. Flynn is great as he deals with his ex, Bennett, and he handles the fall out well.

We are also treated to an interesting array of secondary characters and I am sure you will notice a couple of familiar names… is that a coincidence or are some of our favourite authors moonlighting as film crew????

I recommend this to those who love new beginnings, finding new love, putting the past to rest and a great beginning to an enjoyable series.