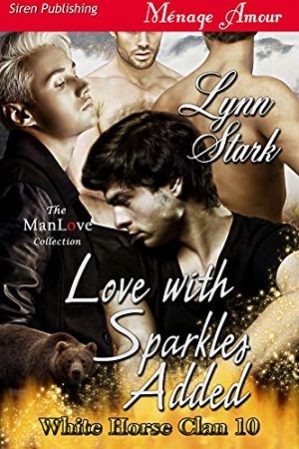 Blurb: Coven leader Cain Windgate was aware he had a mate on the farm where members of his coven wanted to relocate. He didn’t know how a mate would fit into his orderly life. And if there was more than one? All he could envision was a future of chaos. When he arrived on the farm to discuss members of his coven desiring to move there, he finally learned their numbers and their identities. There were three of them. Three mates with distinctly different personalities. Not one of them was a vampire, someone who would know that vampires were governed by strict rules, none of which included adding sparkles to anything. There was Chance Harding, a werewolf that had once been human. Then there was Larson Brekken, a brown bear shifter who loved to stir up trouble. And, lastly, there was Pebin Xavier Muldoon, a fairy with a love for all things shiny. Nope, not a vampire among them.

Review: A large mixture of attitudes and quirks. Cain is the leader of his vampires and has a big job of doing it. However he also knows his mates are not there. He has a feeling that they are at the ranch and isn’t really to into it. He just has no clue how to make it work. He is a city vampire and those at the ranch are well not. He just had not expected three of them, and there is not a vampire in the mix.

Chance was a human but is now a werewolf and has one hell of a grumpy attitude towards everyone. Larson is the big ass bear shifter who just loves to drive Chance crazy. Neither are really big on popping out babies, which is probably why they are not doing the dirty right off the bat. Then there is sexy little Pebin. Now Pebin is a fairy who wants to pop out those babies and decorate everything with glitter. Four separate personallities and damn is this going to be funny as hell.

I spent most of my time wanting to smack the alpha’s in the ass and laughing at Pebin. He was the best character of them all. The whole group if a blast to read about, and lets not forget Fred’s crazy ass five year olds and their stealing ways. The only danger of them all. It is a eays read with a nice pace going for it. The only problem with it was that it seems to be missing a certain spark to it. The connection between the four men just doesn’t seem to go smoothly which in some ways works out fine but in others makes it seem like they were pushed to it.

Overall I had a blast reading it and can’t wait to get my hands on the next story. I was real glad to see that none of these guys were given a female mate, but that is just me. I would definitely recommend it.