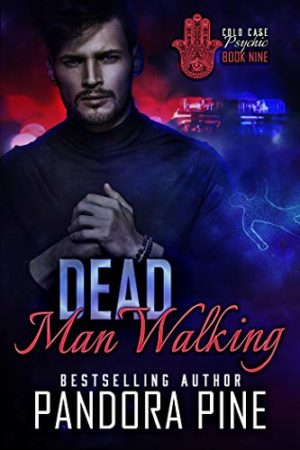 Blurb: Cold Case Detective, Ronan O’Mara is stunned to see the breaking news that a well-known mobster he helped to put behind bars, Vito “The Dragon” Dragonni, has been released from prison after his life sentence is overturned on a technicality. When prominent members involved in the original case against The Dragon start turning up dead, Ronan starts to wonder if he’s next.

Psychic, Tennyson Grimm starts having visions of dead men with The Dragon’s signature kill shot: two bullet holes to the forehead. The men in the visions are strangers, but when he learns from an undercover agent that Dragonni has compiled a hit list with Ronan and his ex-partner, Tony, at the top, he fears a day will come when he recognizes the murder victim in his vision.

Tony Abruzzi has been a broken man since the tragic death of his adopted son, Mark. Refusing the offer of protective custody until Dragonni and his hit squad are off the streets, he seems to be daring the mobster to come after him. Despite the fact that they’ve been estranged since the case that cost Tony’s son his life, Ronan decides to stick to his former partner’s side as his personal bodyguard, whether Tony wants his help or not.

Can Ronan and Tony find a way to work together to stop The Dragon before he can cross more names off his hit list or are both detectives dead men walking?

Review: Two me on the outs find a common goal and come together to stop a crime figure they thought was finally behind them. I loved this story.

Intense emotions and scenes culminate in a suspenseful ride into a dangerous situation where Ronan protects his ex partner from the Dragon before the Dragon or his men can eliminate Tony like his son was.

I do not want to give away too much of the story in this review. I love that despite Tony and Ronan’s estrangement these two work together once again. The Dragon and his men are no joke when the bodies start piling up it gets scary quick.

Intense and fast paced this story will have you on the edge of your seat awaiting the outcome.