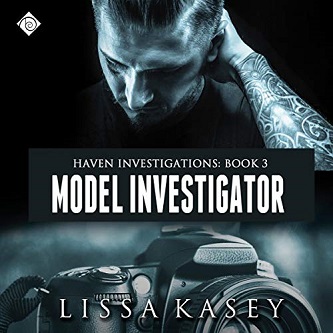 Blurb: With his lover, Kade, missing, androgynous former-model-turned-private-investigator Ollie Pe-troskovic is ready to kick some ass to bring him home.

Ollie and his ex, rock star Jacob Elias, need to find Kade and free him from the clutches of his manipulative family. But with Ollie suffering from chronic migraines and Jacob unable to bear loud noises, they are hardly the dynamic duo. It takes a lot of sweet talking on the part of Jacob – and patience Ollie doesn’t have – to find Kade. Only Kade’s not whole anymore. The fight for Kade’s heart and mind is far from over.

It’s Ollie’s turn to guide Kade through nightmares, self-doubt, and PTSD. Kade’s memories are scattered, fragmented with possible horrors, and he’s not quite sure what is real. Ollie will have to draw on his investigative skills to clear Kade of the terrible accusations his family has made and help Kade unlock the truth. But in doing so, he ignores his own health, which could have catastrophic consequences for everyone, especially when digging up the past could be lethal for them all.

Review: Model Investigator is the third book in Lissa Kasey’s Haven Investigations series. The only way to read this series is in order, or else nothing will make sense. Book 2 had finished on a cliff hanger, which is eventually resolved in this book. I have been absolutely loving this series. These audios is the only experience I have with the author and unfortunately have not looked into Kasey’s other work further, not to say that I won’t some day but I just haven’t had the chance.

The audio narration for this book was provided by Brian Hutchinson, who was narrator for book 2, and book 1 had a different narrator altogether. Overall, this was a wonderful performance. There is a lot going on in this series and I was impressed with Hutchinson’s ability to give the characters, for the most part, distinct voices.

As I said before, this a complicated series with a complicated storyline. We pick up with Kade going missing – kidnapped and held against his will by his own family. It is up to Ollie, a model turned private investigator to help his lover, business partner and fellow PI. Helping Ollie is Jacob, a Rockstar and Ollie’s ex who is now his best friend and now partner in crime when it comes to Haven Investigations and helping the couple solve the ongoing mystery of Ollie’s brother’s death.

There is a lot of angst in this book, and as tiring as it might become, it works well to keep the chemistry and sexual going between Ollie and Kade. As soon as he has Kade back, Ollie lets life, mysteries and insecurities take over, which can make the relationship frustrating as things go hot and cold between then the lovers. But finally the two guys talk, because I have to say miscommunication is one of my biggest hates in a book. Yet, I have to admit that Kasey uses it really well to advance the story as well as add depth to both Ollie and Kade.

There is A LOT going on in this story. However, for the most part the focus in on Kade, his past and his family. Kade’s family are nothing but a drama worthy of soap opera status, which is just the bread between the paternity tests, accusations of rape and various health issues.

I am happy to say that this book ended without the cliff hanger we got in book 2, which I am immensely relieved about. However, that is not say that there wasn’t a tiny little cliff hanger there. There is still the mystery of how Ollie’s brother died and now we also need to find out the importance of new connections and information that has come to light during the course of Model Investigator. Personally, I’d love to hear more from Jacob. I am very much looking forward to Model Exposure, the fourth book in the series, which was published about 1.5 years ago, so hopefully the audio will be out soon.