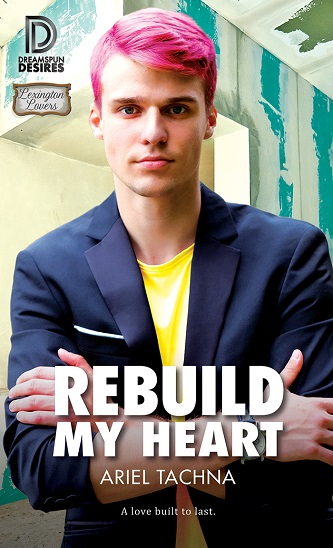 Blurb: A love built to last.

When Derek Jackson is hired to renovate the LGBT bookstore that’s also Owen Hensley’s home, opposites attract. Derek is a big burly blue-collar guy, about ten years older than slight, sweet, and bookish Owen. As they spend time together, it becomes clear that each handsome outside leads to a beautiful interior. Far from the shy twink he appears, Owen has a rock-solid foundation that helped him put himself through college and start his own business. Behind Derek’s strong façade waits a tender heart that’s been battered by a rough family past—something Owen understands.

After Owen’s runaway nephew lands on his doorstep, it throws a wrench in their plans. Derek can’t ask Owen to choose, but he doesn’t think he can take second place with his lover the way he always has with his family. Can they find a way to keep their romance standing?

Review: Rebuild My Heart is the fourth book in Ariel Tachna’s series Lexington Lovers. For Tachna has been an author whose stories are a bit hit and miss with in terms of me getting into the book and enjoying it. For a while there I kind of stayed away from the author until I started reading Tachna’s contributions to Dreamspun Desires, which includes this book as well. I’ve read the previous books in this series too, and while I don’t remember them exactly, I do remember enjoying them and have given those books positive reviews as well. Still, I went into reading this one with a bit of trepidation.

As I mentioned already, this is the fourth in a series. Luckily, these books also work as standalone books because I could only remember the previous book Stage Two, which I had only read recently. However, for those that do remember we do get to check on some previous characters. For me the most important thing was seeing a lot of more Ben and Thane from Stage Two.

The MCs of Rebuild My Heart are Derek Jackson and Owen Hensley. Owen is a quiet enough guy who loves books. He runs his own book store, which has a heavy focus on LGBTQ authors. He puts his heart and soul into his business and is ready to expand his store.

Then, we meet Derek. Derek’s best friend/boss/business partner asks Derek to meet a new client who wants to renovate his business. Where Owen is soft spoken and kind hearted, Derek is strong, burly, brash but with a heart of gold.

There is an immediate connection between the two men and Derek throws himself enthusiastically into Derek’s renovation. The guys seem to guy fall into a relationship that is completely natural for them. It doesn’t feel forced, its quite cute, which is great since we’re really dealing with an instalove type of romance here.

However, Derek has his own personal demons, mostly shaped by a complicated family but complete love for his brother. Similarly, same with Owen. While Derek has a horrible stepmother who torments her stepsons, Owen comes from a religious (cult?) family who refuse any communication because he is gay. This adds to the relationship and how the guys deal to fall in love. Things get even more complicated when one of Owen’s nephews runs away because he can’t deal with the family’s religious cult-like beliefs. Owen, being Owen, takes it all in his stride but with his relationship with Derek so new he doesn’t know how to handle and Derek has his own reservations.

These guys actually made me think of another lovable couple from a completely different author and series, Casey and Hal from Carol Lynne’s Cattle Valley series. I’m not sure if that’s a popular call back for other readers, but I make this comparison because Derek and Owen are basically polar opposites that are made for each other. Their characters are well developed and totally relatable.

Even though they are so different it is easy to see why and how they fit so well together. The only thing that really annoyed me is the good old miscommunication to bring the story forward, I found it a little frustrating but ultimately it was forgiven because it wasn’t made into a needless melodrama. These are just normal guys and they had to work through a lot to make it to the end with a HEA.